By David Lawder and Ann Saphir

WASHINGTON (Reuters) -U.S. Treasury Secretary Janet Yellen said on Thursday that President Joe Biden’s fiscal 2022 budget plan will push U.S. debt above the size of the U.S. economy, but will not contribute to inflationary pressures, which she views as temporary.

Yellen told a U.S. House of Representatives Appropriations subcommittee hearing that the White House and Treasury were closely monitoring inflation but there was still slack in the economy that can absorb increased spending.

“The recent inflation we have seen will be temporary, it’s not something that’s endemic,” Yellen said, responding to numerous questions about inflationary pressures from Republican lawmakers.

She noted that supply bottlenecks and shortages of materials were helping to drive inflation data, along with a rebound from very low measures during the COVID-19 pandemic. “I expect it to last several more months and to see high annual rates of inflation through the end of this year.”

She said Biden’s fiscal 2022 budget request, to be unveiled on Friday, will increase over the next decade the U.S. federal debt-to-GDP ratio above its current level of about 100% — a figure pushed higher by pandemic relief spending.

Yellen downplayed the significance of that increase.

The budget plan is expected to include trillions of dollars in spending on infrastructure, childcare and other public works, incorporating Biden’s previous spending and tax proposals.

The federal government’s ability to pay interest on the debt was a more important measure, she said, adding that the current real interest burden is currently negative because long-term Treasury yields of 1.6% are below an inflation rate of about 2%.

“We’ll have a temporary period of spending too and some of these increases, will – beyond the budget window – will result in lower deficits and more tax revenue to support those expenditures. I believe it is a fiscally responsible program,” Yellen said.

The investments would increase the economy’s supply capacity and allow faster growth in future years without inflation, she added.

Among those proposals that she forecasts will increase U.S. revenues is an increase to the Internal Revenue Service budget to crack down on tax evasion by wealthy individuals. She said the Treasury’s budget request would include $13.2 billion in discretionary appropriations for the IRS — an increase of about $1.3 billion from enacted fiscal 2021 levels.

The IRS budget would include an additional $417 million as part of a multi-year program to boost tax enforcement and revamp IRS information technology architecture, as part of Biden’s proposed legislation to increase support for American families. 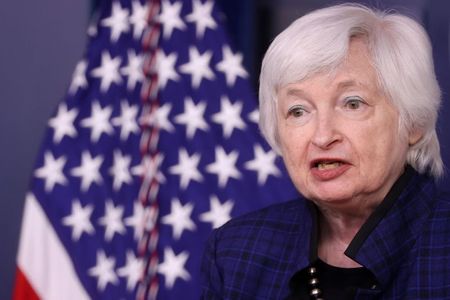