By Doina Chiacu and David Lawder

WASHINGTON (Reuters) -U.S. Treasury Secretary Janet Yellen said on Sunday that it will be lawmakers’ responsibility to raise the federal debt limit and expressed confidence that Congress would do so after the temporary reprieve runs out on Dec. 3.

“Once Congress and the administration have decided on spending plans and tax plans, it’s simply their responsibility to pay the bills that result from that,” Yellen told ABC’s “This Week” program. “It’s a housekeeping chore. Because really, we should be debating the government’s fiscal policy.”

Following weeks of partisan fighting, the Senate approved a short-term fix https://www.reuters.com/world/us/us-senate-democrats-republicans-haggle-over-short-term-debt-fix-2021-10-07 on Thursday that will allow the United States to avoid defaulting on its bills through Dec. 3. Those bills were to pay for Congress’ past decisions, Yellen noted, referring to spending Republican lawmakers had backed.

On Friday, Senate Republican Leader Mitch McConnell wrote in a letter to Biden that he would not aid https://www.reuters.com/world/us/mcconnell-says-republicans-will-not-again-aid-democrats-raising-debt-limit-2021-10-08 Democrats again in raising the debt limit.

“I don’t believe any president has ever had to make a decision about what they would do if Congress failed to raise the debt ceiling. I can’t imagine our being there on December 3rd,” Yellen said.

Yellen said she was confident that Congress’ Democratic leaders, House Speaker Nancy Pelosi and Senate Majority Leader Chuck Schumer, “will be able to manage this so that we don’t face this situation.”

She ruled out invoking the 14th Amendment of the U.S. Constitution, which says the validity of U.S. public debt “shall not be questioned.” Some Democrats have argued that this could be used to invalidate the debt ceiling, but it would entail a legal fight that would likely go to the Supreme Court.

Congressional Democrats are working on President Joe Biden’s sweeping social safety net agenda, but have yet to agree on a target size for the multitrillion dollar spending bill.

Yellen appeared open to the idea of means-testing some of the programs in the plan to target the Americans who need it most, a move supported by Democratic Senator Joe Manchin, who has been pushing for a slimmer bill.

“There is a trade-off there. We know that programs that are universal have tended to be long-lasting and very popular,” Yellen said. “But there is also an argument for, you know, making sure that the highest income Americans perhaps don’t get the benefit of a program that is most needed by those with lower income.” 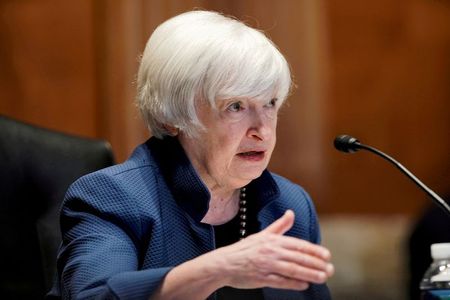 GFG Alliance says it can pay back creditors after major restructuring