NEW YORK (Reuters) – Leon Black, the billionaire who until recently had led private equity firm Apollo Global Management Inc for more than three decades, was sued on Tuesday by a woman who accused him of defamation and subjecting her to sexual violence.

Guzel Ganieva said Black lied by denying her March 17 accusations on Twitter that he had “sexually harassed and abused” her “for years,” when he told news media in April he had “foolishly had a consensual affair” with her and that she extorted him.

The complaint said Black subjected Ganieva over several years to numerous instances of unwanted sexual conduct. It referred twice to his alleged “sexual assaults and rapes” of her, and specifically described one alleged rape from 2014.

“Ms. Ganieva’s allegations of harassment and other inappropriate behavior are categorically untrue,” a spokesman for Black said in a statement. “Mr. Black emphatically denies each and every spurious allegation put forth in this lawsuit and looks forward to disproving them in court.”

The spokesman also said Black made “substantial monetary payments” to Ganieva based on her threats to go public about their relationship. He did not specify a dollar amount.

Ganieva said in her complaint that she received unspecified “regular payments” from Black for 5-1/2 years after she signed a nondisclosure agreement in October 2015.

She said Black moved to silence her for his alleged misconduct by coercing her into signing the agreement, in exchange for forgiving $960,000 of loans he had made and which she could not repay.

Black, 69, stepped down this year as Apollo’s chief executive and chairman, after an independent review conducted by the Dechert law firm said he had paid the disgraced financier Jeffrey Epstein $158 million for tax and estate planning.

The Dechert report found Black was not involved with Epstein’s criminal activities. Black said at the time he deeply regretted his involvement with Epstein.

Ganieva, a Russian native now in her late 30s, said Black picked her out of a crowd at a 2008 International Women’s Day event, and later accompanied her to top restaurants, Broadway shows, cultural events and private parties.

“He didn’t try to keep her a secret,” Ganieva’s lawyer Jeanne Christensen said in a telephone interview.

The lawsuit in a New York state court in Manhattan seeks unspecified damages. 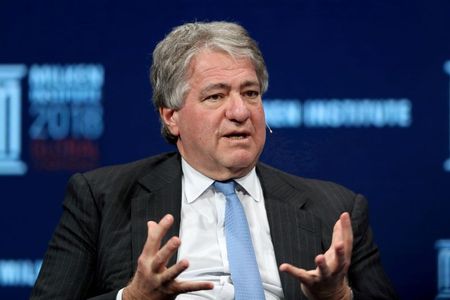 Vietnam pledges not to devalue currency in agreement with U.S. Treasury