Home Business Wizz Air urges EU to keep ‘use it or lose it’ airport...

(Reuters) – Europe’s airport slot rules should not be changed to protect legacy airlines, the head of European low cost carrier Wizz Air said on Thursday, adding that if a company could not operate its slots they should be made available to rivals.

An easing of the “use it or lose it” rule has allowed legacy carriers to preserve airport access during the coronavirus crisis despite a sharp drop in traffic, sparking protests from low-cost rivals keen to expand into once-congested airports.

“Leave the slot rules as they used to be prior to the pandemic and the market will sort it out,” Wizz Air CEO Jozsef Varadi told Reuters in an interview in Abu Dhabi.

“We would be able to operate those slots at constrained airports so why are they protected for the benefit of legacy carriers who are incapable of operating them because they are inefficient?”

Varadi said easing the rules was, in a way, “distorting the market” because it protected legacy carriers struggling to fill planes from lower cost rivals that could sell all their seats.

Under European Union airport rules, airlines must use at least 80% of their take-off and landing slots in order to keep them for the following year.

The EU suspended those rules at the start of the COVID-19 crisis, but has started partially restoring them, rekindling concerns over empty flights as the pandemic continues.

Varadi, head of Wizz Air since its inception in 2003, said access to airports should be prioritised as a public interest.

Ireland’s Ryanair this week accused Lufthansa of exploiting climate concerns to stifle competition after the German carrier complained it had to operate tens of thousands of additional flights to comply with slot rules. 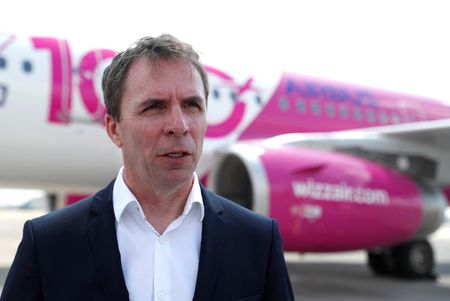 Musk says Tesla has not signed a contract with Hertz yet, halts stock rally

Japan to release a few hundred thousand kilolitres of oil from...