(Reuters) – Federal Reserve Chair Jerome Powell on Friday pushed back against concerns that swiftly rising prices could become an enduring feature of the economy, forcing the U.S. central bank to raise interest rates and cut short the recovery.

While recent inflation readings are “a cause for concern,” Powell told the Kansas City Fed’s annual Jackson Hole economic symposium, responding to what he sees as likely to be a temporary trend by tightening monetary policy could be a “particularly harmful” mistake.

It was a provocative case to stake out at a time when inflation is sapping consumer sentiment and emerging as a political hot potato just as President Joe Biden weighs whether to appoint Powell to a second term as Fed chief.

Powell’s decision to build the case for why inflation isn’t a worry – rather than sketch out what could go wrong – drew praise from advocates of the year-old policy framework he championed that emphasizes the Fed’s full employment goal and rejects the kind of preemptive inflation-fighting rate hikes that were the stock-in-trade of the Fed in its previous incarnations.

It also sparked criticism from those less sanguine about the risks, with Harvard University’s Jason Furman, who was a former senior economic aide in the Obama administration, saying that Powell was “failing to take seriously any arguments on the other side.”

And, of course, it comes as Fed officials themselves fully join their own internal debate about when to start backing away from the emergency measures implemented to shield the economy from the disruptions – still ongoing to some degree – of the COVID-19 pandemic.

A number of Powell’s fellow central bankers have begun pushing for the Fed’s asset purchases to be quickly wound down as the first leg of that process.

Indeed, Powell used his speech on Friday to acknowledge that, at least as of last month’s policy meeting, he was in favor of the Fed starting to reduce its $120 billion in monthly asset purchases this year, with inflation already meeting the bar to do so, and further progress on the employment front expected.

But to raise interest rates the Fed has said the economy must meet a more stringent test, including not only maximum employment but also inflation that has reached and looks on track to exceed 2% for some time. Though some other Fed policymakers have said they believe inflation is already averaging that elusive target, Powell remained uncommitted.

“Time will tell whether we have reached 2% on a sustainable basis,” Powell said.

The personal consumption expenditures (PCE) price index excluding the volatile food and energy components, which is a key measure of inflation, rose 3.6% in the 12 months through July, data on Friday showed. On a monthly basis, the gain was the smallest in five months.

Here’s Powell’s five-point rundown on why he’s not perturbed:

Inflation so far is coming from sharply higher prices in a limited number of sectors, particularly in goods and services hit hardest by the coronavirus pandemic and for which demand is now fast recovering as the economy reopens.

Prices of cars and other durable goods are now stabilizing or dropping after skyrocketing in the summer. “It seems unlikely that durables inflation will continue to contribute importantly over time to overall inflation,” Powell said.

3) NO THREAT FROM WAGES SO FAR

Wages are rising, but not faster than productivity gains or inflation in a way that could lead to an upward spiral. “We will continue to monitor this carefully,” he said.

The market-based and survey-based measures that the Fed looks at indicate that inflation expectations have made a “welcome” return to levels more consistent with its inflation goal but have not risen as fast as actual inflation, “suggesting households, businesses and market participants also believe that current high inflation readings are likely to prove transitory,” Powell said.

5) GLOBALLY, THE PRESSURE IS DOWNWARD

Factors such as aging populations in the United States and elsewhere, along with globalization and advancements in technology, are pushing down on prices globally. “There is little reason to think that they have suddenly reversed or abated,” Powell said. 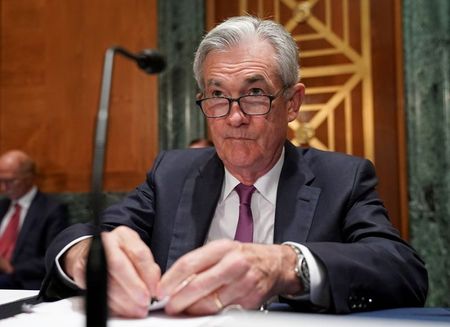 Britain set to ban Huawei from 5G, though timescale unclear

India’s Vodafone Idea says board has no proposal from Amazon, Verizon