(Reuters) – Wall Street’s main indexes slid on Tuesday, with the S&P 500 logging its biggest one-day percentage fall in about a month, weighed down by a drop in U.S. retail sales that raised concerns about the economic recovery, as well as by disappointing results from Home Depot.

Most of the S&P 500’s sectors finished lower, with consumer discretionary the weakest performer, falling 2.3%.

A report showed that U.S. retail sales fell more than expected in July, as supply shortages depressed motor vehicle purchases and the boost to spending from the economy’s reopening and stimulus checks faded, suggesting a slowdown in growth early in the third quarter.

“The retail sales drop I think clarified for investors that COVID may well be a big problem going into the fall,” said Rick Meckler, partner at Cherry Lane Investments in New Vernon, New Jersey.

Prior to Tuesday’s drops, the S&P 500 and the Dow Jones Industrial Average had closed at record highs for five straight sessions.

“The (market) backdrop remains really solid,” said Katie Nixon, chief investment officer at Northern Trust Wealth Management. “At this point, when you have some of these negative macro indicators coming in and you have markets that are selling at all-time highs with pretty expensive valuations by any measure, there is just going to be more vulnerability to that kind of bad news.”

With the market in a period that has seasonally been weak historically, investors have said stocks may be due for a significant drop, with the S&P 500 yet to experience a 5% pullback this year. On Monday, the S&P 500 closed 100% above its March 2020 low.

Still, market watchers have said that huge amounts of cash held by investors and companies could protect stocks from severe declines, as buyers are quick to look for opportunities to scoop up cheaper shares. Indeed, the indexes ended well above their session lows on Tuesday as stocks partially recovered late in the day.

In an encouraging sign about the economic rebound, a Federal Reserve report showed production at U.S. factories surged in July.

Investors are looking for signs about when the Fed will rein in its easy money policies, with minutes from the central bank’s latest meeting due on Wednesday, and are watching the resurgence in COVID-19 cases and its impact on the economy.

Declining issues outnumbered advancing ones on the NYSE by a 2.92-to-1 ratio; on Nasdaq, a 2.51-to-1 ratio favored decliners.

About 9.5 billion shares changed hands in U.S. exchanges, above the 9.2 billion daily average over the last 20 sessions. 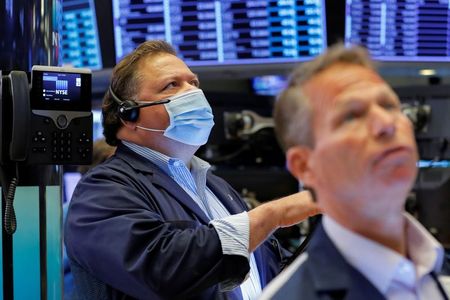 Explainer: What’s next for Ant after China suspends $37 billion listing?

Ford requires visitors to wear masks but unclear if Trump will...