Home Business Wall Street rallies as Fed jitters wane, but ends down for the...

While all three major U.S. indexes ended solidly green, all posted weekly losses after a steep mid-week sell-off pulled the S&P 500 and the Dow away from a string of record closing highs.

“Towards the beginning of the week you saw traders balancing their books ahead of the Fed statement,” said Matthew Keator, managing partner in the Keator Group, a wealth management firm in Lenox, Massachusetts. “And once the statement came out, you saw a bit of ‘sell the rumor buy the news.'”

Market-leading tech and tech-adjacent megacaps, which weathered the pandemic recession better than most, once again provided the biggest lift.

Growth stocks were also given a boost by U.S. Treasury yields, which ended the week lower due to concerns the health crisis could be a longer than expected hindrance to economic revival.

Announcements from a host of Asian nations that they are implementing drastic measures to curb the resurgence of COVID-19 due to the rise of the disease’s highly contagious Delta variant, put a damper on stocks associated with economic re-engagement.

Mixed economic data from the U.S. and China suggested the ongoing recovery from the most abrupt recession on record has passed its peak and lost some momentum.

Market participants now look to next week’s Jackson Hole Symposium in Wyoming, a gathering of major central bank leaders, for clues from Fed Chair Jerome Powell regarding the expected pace of recovery and the timeline for policy tightening.

“We’ve seen times in history where the Jackson Hole Symposium has drawn a lot of eyeballs but this year more so,” Keator added. “The Fed might use this opportunity to communicate what their plan is going forward.”

All 11 major sectors of the S&P 500 ended the session higher, with tech stocks and utilities enjoying the largest percentage gains.

Second-quarter reporting season has essentially run its course, with 476 of the companies in the S&P 500 having posted results. Of those, 87.4% have beaten consensus, according to Refinitiv data.

U.S.-listed shares of China-based tech-related companies oscillated market participants as they digested recent sell-offs resulting from Beijing’s ongoing regulatory crackdown, which has wiped half a trillion dollars from Chinese markets this week.

Advancing issues outnumbered declining ones on the NYSE by a 2.37-to-1 ratio; on Nasdaq, a 2.21-to-1 ratio favored advancers.

Volume on U.S. exchanges was 8.72 billion shares, compared with the 9.21 billion average over the last 20 trading days. 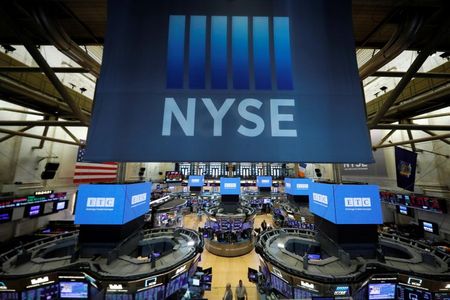 Ransomware attacks on the rise even as cyber insurers scale back

GM says it can pay off $16 billion loan if U.S. recovery continues

Fed hawks circle before Powell speech as they push for bond...

The living’s not easy for worker-hungry U.S. businesses this summertime