By Stephen Culp and Echo Wang

NEW YORK (Reuters) – Wall Street closed near record highs in light trading on Friday, the last trading day of 2021, marking the second year of recovery from a global pandemic.

Companies, consumers and the broader economy largely thrived in 2021 as they felt their way forward amid a constantly shifting landscape including a tumultuous transfer of power marked by the Jan. 6 Capitol riot. Other factors included the “meme stock” phenomenon, new COVID-19 variants, a labor shortage, generous fiscal/monetary stimulus, hobbled supply chains, booming demand and the resulting price spikes.

“What stands out to us this year among all the negatives, is the resiliency of Corporate America,” said Ryan Detrick, chief market strategist at LPL Financial in Charlotte, North Carolina. “In a sea of uncertainty and higher prices, you have to be extremely impressed by how agile and adaptive Corporate America was to sport 45% earnings growth in a very difficult year.”

Indeed, earnings results from S&P 500 companies blew past analyst estimates to deliver year-on-year growth in the first three quarters of the year of 52.8%, 96.3% and 42.6%, respectively, according to Refinitiv, which currently sees fourth-quarter annual earnings growth of 22.3%.

Market-leading tech and tech-adjacent megacap stocks, which outperformed the broader market in the first year of the global health crisis, were laggards as the economy slowly reopened and vaccines were deployed.

Dow Transports <.DJT>, considered by many a barometer of economic health, registered a yearly gain of more than 31%.

Steadily rising Treasury yields – along with a recent hawkish shift from the Federal Reserve, which now foresees as many as three rate hikes in the coming year – have supported interest rate-sensitive financials <.SPSY> which gained nearly 33%.

The COVID-19 pandemic, which burst onto the scene in early 2020 and prompted the steepest, quickest economic contraction in history, continues to linger, pressuring travel-related stocks.

The S&P 1500 Airlines index <.SPCOMAIR> ended 2021 as one of the year’s few losing sectors with an annual decline of nearly 2%.

But early data suggests https://www.reuters.com/business/healthcare-pharmaceuticals/hospitalisation-risk-omicron-around-one-third-delta-uk-analysis-shows-2021-12-31 the Omicron variant, which has caused an abrupt spike in global infections, is less virulent than its predecessors and economic data is increasingly suggesting a return to normal, two years after the first cases of COVID-19 were reported.

Volume on U.S. exchanges was 7.6 billion shares, compared with the 10.55 billion average for the full session over the last 20 trading days.

Of the 11 major sectors in the S&P 500, consumer staples sector <.SPLRCS> was up the most in Friday’s session, with communications services <.SPLRCL> suffering the biggest percentage drop.

Advancing issues outnumbered declining ones on the NYSE by a 1.39-to-1 ratio; on Nasdaq, a 1.18-to-1 ratio favored decliners. 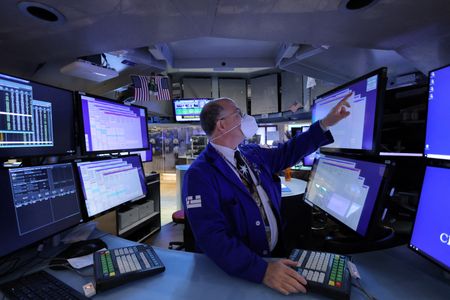 Coinbase valuation pegged at $68 billion ahead of landmark U.S. listing

Analysis: The three data reports that persuaded Powell to speed up Fed’s taper