(Reuters) -Walgreens Boots Alliance contributed to the opioid epidemic in San Francisco through its sale of prescription drugs in the city, a federal judge concluded on Wednesday.

U.S. District Judge Charles Breyer in San Francisco said that Walgreens failed to properly investigate suspicious opioid orders for nearly 15 years. The amount the pharmacy chain must pay will be determined in a later trial.

Walgreens’ pharmacists filled hundreds of thousands of suspicious opioid prescriptions from 2006 to 2020 with pharmacists not given time, staffing or resources to properly investigate red flags, Breyer wrote.

San Francisco in 2018 sued Walgreens, as well as several drug manufacturers and distributors, over the opioid epidemic in the city, saying they created a “public nuisance” by flooding the city with prescription opioids and failing to prevent the drugs from being diverted for illegal use.

A trial began in April, and all of the defendants except Walgreens reached settlements with the city before the court ruled.

Breyer said San Francisco had shown that Walgreens’ lax oversight led to illegal drug use that substantially contributed to the opioid epidemic in the city.

Walgreens said that it was disappointed with the ruling and intends to appeal.

“We never manufactured or marketed opioids, nor did we distribute them to the ‘pill mills’ and internet pharmacies that fueled this crisis,” Walgreens spokesman Fraser Engerman said.

The opioid epidemic has caused more than 500,000 opioid overdose deaths over two decades, according to the U.S. Centers for Disease Control and Prevention. More than 3,300 opioid lawsuits have been filed nationally against drug manufacturers, distributors and pharmacies, culminating with many of the other companies – though not the pharmacies – agreeing to proposed global settlements.

The opioid crisis has hit San Francisco hard, with opioid-related emergency room tripling from 886 in 2015 to 2,998 in 2020, according to the court ruling.

Paul Geller, an attorney who represented the city in the case, credited San Francisco City Attorney David Chiu for working to hold companies accountable for contributing to “the horrific epidemic in the Bay Area.”

Walgreens was found liable in 2021 for contributing to the opioid epidemic in a similar trial brought by two Ohio counties. Walgreens and its co-defendants, CVS Health Inc and Walmart, are awaiting a ruling from the Ohio court on the amount they must pay to address the opioid crisis in those counties. 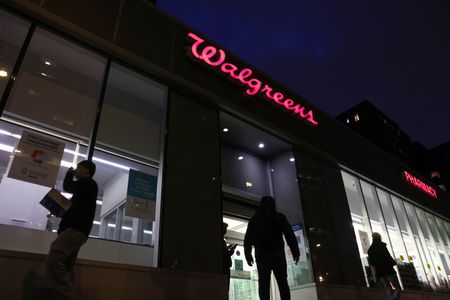