By Christoph Steitz and Jan Schwartz

FRANKFURT/HAMBURG (Reuters) -Volkswagen CEO Herbert Diess sought to defuse a clash over the pace of reforms he thinks are needed to keep up with the likes of Tesla by addressing thousands of workers at the German carmaker’s Wolfsburg plant on Thursday.

At the heart of the rift lies Diess’ concerns that Volkswagen might fall behind rivals unless it accelerates an overhaul to compete with electric vehicle maker Tesla, led by CEO Elon Musk, and nimbler rivals in China. Workers, meanwhile, are concerned that means potentially huge job cuts.

Sources said the rift between workers and management has rekindled a long-standing conflict that has even led to a discussion about Diess’ future at a pivotal moment in the history of the world’s second-largest carmaker.

“I’m being frequently asked why I keep comparing us with Tesla. I know this is annoying to some,” Diess told workers.

“Even if I no longer talk about Elon Musk: he’ll still be there and revolutionises our industry and keeps getting more competitive quickly.”

The conflict highlights the limitations Diess faces in steering the behemoth that employs 675,000 staff and navigating a complex stakeholder structure, where labour representatives and the state of Lower Saxony have a majority on the supervisory board.

Sources familiar with the matter said on Wednesday a specially convened committee would discuss the future of Diess in an attempt to solve the dispute.

Works council boss Cavallo criticised Diess for his communication style in recent weeks, which she said fuelled concerns the transformation he was proposing will result in tens of thousands of job cuts.

“We’re tired of hearing time and again that the works council is apparently only concerned with preserving the status quo,” she said, adding workers and labour representatives were all backing the needed overhaul.

Diess, in a supervisory board meeting in September, warned that as many as 30,000 jobs could be lost if Volkswagen was not fast enough in transforming itself, sources have said. He has said Tesla is much more efficient with its much smaller workforce.

Musk, who is currently awaiting the opening of Tesla’s first European gigafactory in Gruenheide near Berlin, even dialled into a meeting of top level Volkswagen executives last month and talked to them for over an hour, Diess said last week.

“The fascination that you apparently feel for Mr Musk and the effort you’re making in staying in contact with him – we would welcome if it was the same for the huge challenges the company currently faces,” Cavallo said. 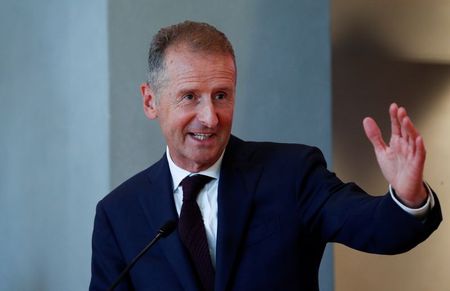 FBI was ‘persistent’ about getting information in Huawei CFO’s extradition case, court hears

(Reuters) -Australia's securities regulator said on Thursday it was suing...

By David French and Chibuike Oguh ...

Fewer U.S. workers sidelined by Delta variant in September even as...