NEW YORK (Reuters) – U.S. employment increased more than expected in October as the headwind from the surge in COVID-19 infections over the summer subsided, offering more evidence that economic activity was regaining momentum early in the fourth quarter.

Nonfarm payrolls increased by 531,000 jobs last month, the Labor Department said on Friday. Data for September was revised higher to show 312,000 created instead of the previously reported 194,000. Economists polled by Reuters had forecast payrolls rising by 450,000 jobs. Worker shortages persisted, even as federal government-funded unemployment benefits wound down in early September and schools reopened.

STOCKS: S&P e-mini futures extended slight gains and were up 0.43%, pointing to a firm open on Wall Street

EDWARD MOYA, SENIOR MARKET ANALYST, OANDA, NEW YORK“Today’s number really goes to show that the US economy is accelerating and while the labor market recovery will be long it won’t be lasting. You’ll see this type of report be extremely positive for equities, but it doesn’t really change the Fed’s thinking. Currency markets will be a little more difficult and you’re going to see a lot more interesting divergences as we enter the realm of tapering.”

“The positive aspect of it is that investors have been concerned about a slowdown in the economy. We’ve seen signs that it could be slowing, particularly given the supply chain interruptions, but the (nonfarm payrolls data) suggests that the economy is on track. Investors will take it as a positive sign to continue to invest in stocks. The other side of it, of course, is that it does nothing to cool the potential for inflation. But that seems to be a problem for another day for stock market investors where bond rates fail.

“It’s hard to understand how we can have a high unemployment rate and still have labor shortages. It suggests a real mismatch.”

“The last couple of months the headline number was a bit disappointing, so this a catch-up number. I don’t think it changes much in terms of thinking about what the Fed does in 2022 when rate lift-off is.  But it’s a sigh of relief after the Delta variant dampened employment the past couple of months and now it’s behind us.

“This tells me we’re kind of hanging in this range, of 1.5% to 1.7% on the 10-year. Anything that’s going to be breakout higher or lower is going to have to be an announcement or a series of announcements or data that leads us away from that. The market expected some bump in hiring. The market is comfortable with where rates are and we’ll have to wait for an inflection point.”

“The market’s preconceptions for a strong payrolls report were vindicated with the release, which saw not only an upwards surprise in net employment in October, but a positive revision to September’s disappointing reading as well.”

“With the Fed’s forward guidance on rates largely linked to the recovery in the labour market, today’ s positive employment data resulted in the U.S. 2-year yield climbing over 2 basis points on the day before moderating somewhat. Widening front-end yield spread drove the reaction in FX markets, with the dollar going bid across the G10 space.”

“We had warned of asymmetric risk heading into today’s payrolls release, given the slip in September’s data due to the early initial surveying window. Not only did we expect an upwards revision to last month’s data for this reason, but also expected October’s net employment figure to come in strong given the tailwinds from improving COVID conditions. Looking ahead, today’s payroll release will likely keep the dollar elevated, until improving economic conditions and more hawkish central bank communications return towards the end of the year.”

MICHAEL SHELDON, CHIEF INVESTMENT OFFICER, RDM FINANCIAL GROUP, WESTPORT, CONNECTICUT  “The headline number is certainly quite positive for markets and gives the idea that the economy is in good shape heading into 2022 and also bestows confidence that the consumer is in a strong position to spend and support the economy.”

“One alarming factor is the participation rate which has not improved and that indicates the job market might not be as tight as it appears on the surface.”

“The solid jobs report tells the market that the Fed made the right decision in its tapering plans and the time is right for the Fed to step away from the gas a little bit.”

“It’s hard not to like, this is a really good report overall, particularly when you look from a private sector point of view. It’s 531,000 but 73,000 jobs were lost in government so the private sector is absolutely killing it. The one number that just leaped out at me, which I think it really incredible is transportation, it is above its February 2020 level, so that is really amazing. All we hear about in transportation right now is all these supply chain issues, but at the same time we are hiring a hell of a lot more people here. Warehousing and storage up, transit and ground transportation up, air transport up, truck transport up, the only thing that decreased there was the couriers and messengers so it is truly the careers where you are gaining. That was far and away the best thing I saw in the report.”

“Yes, there are some supply chain issues but there is so much demand they are still throwing people at that problem and you need to move goods, so at some point that bottleneck will figure itself out.”

“I would think that this number would put some upward pressure, particularly on the belly of (the U.S. Treasury) curve as we sort of think the economic numbers are going to have a bigger impact from here now that (U.S. Federal Reserve) Chairman Powell has indicated they’re willing to remain patient and struck a dovish tone earlier this week. They’re kind of there on the inflation front and the focus is on maximum employment. So I would think that a number like this might bring back some of this market pricing that we saw yesterday as the Bank of England did the surprise hold on rates.”

“It seems to be a very good report. Participation rate is up; it was certainly well above expectations. They revised up back months. Unemployment rate falls again. There’s not a lot to complain about in the employment report.

The knee-jerk reaction in the markets was not much. And I’m looking at the fixed income market, and I don’t see a lot there, either. The 2/10 (yield) spread came in a little but not much.”

“(The employment report) was basically inline and the unemployment rate dropped to 4.6%, but that was probably due to the participation rate ticking lower.

“Hourly wages are a little bit higher but nothing to take the wind out of this positive report. Shouldn’t have an impact on yields.

“Bottom line is it’s a good report, showing an acceleration from the previous month.

“It shows that we’re seeing the jobs market healing to the point where we could expect even larger gains next month as more people return to the labor force.”

“If these numbers continue at this pace, we could probably see full employment at the end of the first quarter.”

“Everything moved in the direction you would want it to move. I think it shows some real underlying strength. What’s interesting is I don’t think you need this payroll report, though, to know that because there’s been a host of other labor market metrics that have really driven that point home, whether its ADP, or claims, or the measures of confidence that focus on the labor backdrop. I mean over the last couple of months we’ve seen some real strength here, so in some ways I almost view this payroll report as sort of a catch up, because it has been the laggard.”

“A welcome bounce back in hiring has punched the U.S. dollar’s ticket to fresh highs for the year. Still, the buck could see limited upside mileage out of the data because the participation rate has not improved. The participation rate idled at 61.6% which is consistent with people being hesitant about returning to the workforce due to lingering health concerns. The market wants to see people come off the sidelines and return to the labor force.”

“We couldn’t get more positive news. Obviously, the market was up a lot prior to this with the Pfizer news, but now this does feel like it’s really the end of the pandemic. The next phase of improvement in the labor force is going to come from labor force participation rate increasing, and the Pfizer drug is going to be the catalyst for that.” 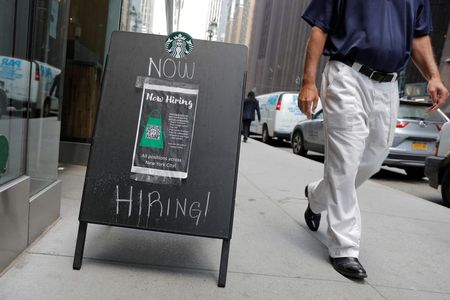