HOUSTON (Reuters) -The United Steelworkers union (USW) urged locked-out workers at Exxon Mobil Corp’s Beaumont, Texas, refinery to reject a company contract offer in a vote scheduled for Tuesday, according to a union statement reviewed by Reuters on Thursday.

“The union is in the process of educating its members on the details of the offer and is asking the members to stand together and vote no to this sub par offer,” the union said in a message to 650 locked-out members of USW Local 13-243 in Beaumont.

The upcoming contract vote is the first to be taken by workers at the 369,024 barrel-per-day (bpd) Beaumont refinery and adjoining lubricant oil plant since negotiations began in January and the workers were locked out on May 1.

An Exxon spokesperson did not immediately reply to a request for comment.

Exxon has said the workers were locked out to avoid a disruption from a possible strike. The company has been running the refinery at reduced production levels with supervisors and temporary replacements.

The USW continues to oppose Exxon’s proposal to eliminate job seniority, which gives workers a say in job assignments.

The union also said Exxon’s contract proposal would lead to some jobs being eliminated in the next three years. The statement also laid out positions that would not receive pay increases this year and in coming years.

The ratification vote will take place two weeks after the U.S. National Labor Relations Board (NLRB) received a petition with signatures from 30% of the Exxon workers calling for removal of the union.

The NLRB is in the investigation and regional determination phase of reviewing the removal petition, which could lead a vote some time in the future, according to the agency.

(Reporting by Erwin SebaEditing by Chris Reese and Richard Pullin) 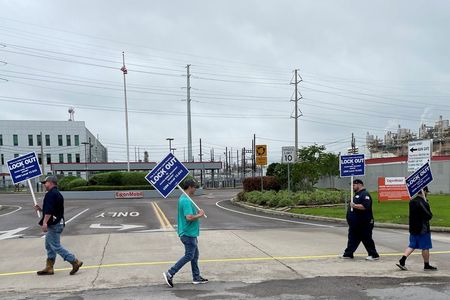