HOUSTON (Reuters) -Members of the union representing locked-out workers at Exxon Mobil Corp’s Beaumont, Texas, refinery have submitted a petition to force a vote on removing the union, the union and company said on Wednesday.

Exxon and the local United Steelworkers union said they were notified by the U.S. National Labor Relations Board, which will oversee the vote, that a petition calling for removal had been filed. It was unclear when the vote would occur.

The union represents 650 workers who have been locked out of their jobs since May 1, following failure to reach a new contract after the previous one expired in February.

At least 30% of the members must sign the petition for the decertification vote to take place. Decertification is the formal name for the removal process.

“You’ve got people that have been locked out for six months, it’s getting pretty tough,” Bryan Gross, USW international representative, said about the petition.

“The company respects employee choice and believes in the value of a direct relationship between the company and employees, without a third party union,” Exxon said in a message to Beaumont employees, as confirmed by an Exxon spokesperson.

The USW in April filed a complaint with the NLRB alleging Exxon had violated federal law by providing an employee with decertification materials, employee email addresses and use of a company computer and email system to campaign for decertification.

The petition comes a week after Exxon made its first concession at the bargaining table when it offered greater seniority and job security protection for the lube oil plant workers.

Exxon said it began the lockout to avoid the disruption of a possible strike. The USW said the company’s contract proposal would wipe out seniority and create separate contracts for the workers at the refinery and the adjoining lubricant oil plant. 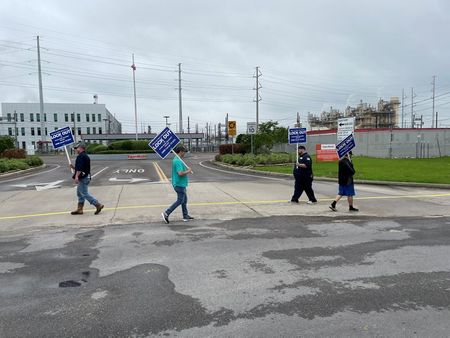