It said that for much of 2021 shoppers were shielded from price increases, with more products being sold on promotion compared to 2020.

However, in the past month only 27.5% of spending was done on deals.

“Other than the early days of lockdown last year, that is the lowest level recorded in the 15 years which we have tracked this data, with retailers aiming to offer everyday low prices instead,” said Fraser McKevitt, head of retail and consumer insight at Kantar.

It said fastest-rising prices are in markets such as savoury snacks, cat food and ambient cakes and pastries, while falling in fresh bacon, vegetables and ambient cooking sauces.

It said inflation would be driven by recent sustained commodity price increases and freight costs, and the current shortage of heavy goods vehicle drivers.

Kantar said total year-on-year grocery sales fell by 1.9% in the 12 weeks to Sept. 5. But sales remain higher than they were before the pandemic, up by 8.7% compared with this period in 2019.

Sales at market leader Tesco were up 0.2% over the 12-week period year-on-year.

It was the only grocer among Britain’s big four players – Tesco, Sainsbury’s, Asda and Morrisons – to see a sales increase, pushing its market share up 0.5 percentage point to 27.3%.

Kantar said the market share of online grocery sales fell to 12.2% in the four weeks to Sept. 5 from 13% four weeks ago – the lowest level since May 2020 as consumers continue to move their spending back in-store. 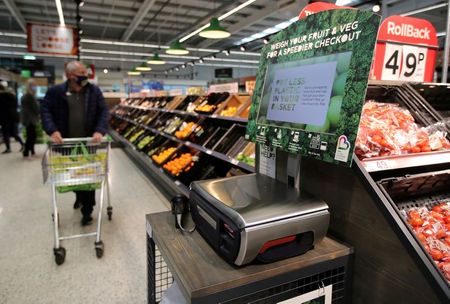 Brazil’s Azul certified to use Embraer E195 as cargo aircraft