LONDON (Reuters) – British employers took on permanent staff last month at the fastest rate since records started being kept in the late 1990s, a survey showed on Friday in another sign that the economy is rebounding swiftly from the COVID-19 pandemic.

Growth in temporary staff placements also hit a six-year high, according to the Recruitment and Employment Confederation (REC) trade body and accountants KPMG.

“We now have a consistent picture over the past few months to show that confidence is growing and hiring plans are in motion,” Kate Shoesmith, REC deputy chief executive officer, said.

Starting salaries rose last month at the fastest rate since September 2018 as the availability of staff declined sharply, which REC linked to pandemic uncertainty and fewer EU candidates.

“With demand spiking, the skills and labour shortages that already existed in the UK have come into sharper focus – and COVID has only made them worse,” Shoesmith said.

“This is the most pressing issue in the jobs market right now, and has the potential to slow down the recovery.”

Last month the Bank of England slashed its forecasts for unemployment to show a peak of 5.4% in the third quarter after finance minister Rishi Sunak extended his jobs protection programme – which has cost more than 60 billion pounds ($85 billion) so far – until the end of September. 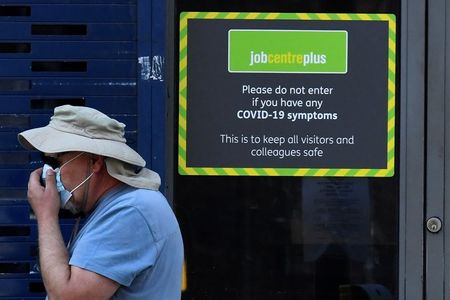