(Reuters) – More U.S. workers are switching jobs and asking for higher wages as the labor market continues to heal from the crisis caused by the coronavirus pandemic, according to a survey released Tuesday by the New York Federal Reserve.

Expectations about the labor market also continued to improve, with the expected likelihood of receiving a job offer in the next four months and the wages expected for that offer both rising, according to the report.

The share of workers who became unemployed in the previous four months dropped to 0.4% in July from 10.5% in July 2020 and is now below the 0.5% seen in November of 2019 before the pandemic. The percentage who moved to a new employer rose to 5.9% in July from 4.4% a year earlier.

The survey, which polled about 1,000 consumers about how their finances changed over the past four months, illustrates how much stronger the labor market is than a year ago, when millions more were unemployed because of the coronavirus pandemic and vaccines were not yet available to the general public.

But the latest data released by the Labor Department last week showed the jobs recovery may be stalling amid a resurgence of COVID-19 infections, driven by the Delta variant of the virus.

The New York Fed survey showed workers also raised their expectations for how much they should be paid. The average reservation wage, or the minimum annual wage consumers said they needed before they would even consider accepting a job offer, increased sharply from a year earlier to $68,954 in July 2021.

That was down from the series high of $71,403 reached in March of this year, but still above the $64,226 seen in July of 2020. The increase was largest for workers above age 45 and for people without college degrees. 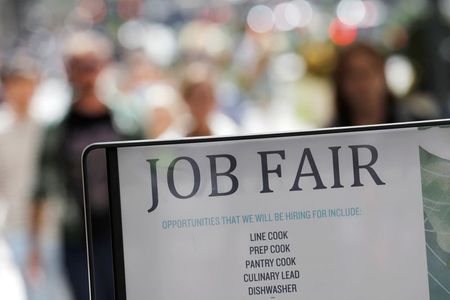 India’s Vodafone Idea says board has no proposal from Amazon, Verizon