WASHINGTON (Reuters) – The number of Americans filing new claims for unemployment benefits increased to the highest level in nearly five months last week, but that likely does not mark a material shift in labor market conditions, which remain extremely tight.

The report from the Labor Department on Thursday also showed unemployment rolls remained at a more than 52-year low at the end of May, underscoring the jobs market’s strength.

Amid reports of companies freezing hiring or contemplating layoffs in anticipation of a recession next year, the weekly jobless claims data is being closely watched. Overall demand for labor, however, remains strong, with 11.4 million job openings at the end of April. Economists largely shrugged off last week’s larger than expected rise in claims as noise.

“Widespread difficulties in hiring workers are still discouraging businesses from laying off workers, but pockets of weakness have emerged among some tech startups as well as retailers which have felt the impact from a shift in consumer spending from goods to services,” said Dante DeAntonio, a senior economist at Moody’s Analytics in West Chester, Pennsylvania.

Initial claims for state unemployment benefits rose 27,000 to a seasonally adjusted 229,000 for the week ended June 4, the highest since mid-January. Economists polled by Reuters had forecast 210,000 applications for the latest week.

The data included the Memorial Day holiday. The seasonal factors, the model that the government uses to strip out seasonal fluctuations from the data, had expected a 21,362 drop in unadjusted claims, as hiring typically increases in summer. But with worker shortages rampant, there is limited room for big decreases and unadjusted claims are already at very low levels.

Unadjusted claims edged up 1,008 to 184,604 last week. There were notable increases in applications in Florida, Georgia and Pennsylvania, which offset declines in Mississippi and Michigan.

“This means that the recent increases in the seasonally adjusted data have occurred because the underlying level of filings has not moved down by as much as the seasonal factors anticipated, but not because of an actual increase in the real-world level of filings,” said Daniel Silver, an economist at JPMorgan in New York.

“We also should keep in mind that the data can be noisy from week to week and particularly noisy around holidays like Memorial Day.”

Stocks on Wall Street were lower. The dollar rose against a basket of currencies. U.S. Treasury prices fell.

STUCK IN A TIGHT RANGE

“Jobless claims are unlikely to move very much from current levels without some loosening in labor markets,” said Isfar Munir, an economist at Citigroup in New York. “A return to more normal labor market conditions would, ironically, be accompanied by a rise in jobless claims.”

The Federal Reserve, seeking to cool demand for labor without raising the unemployment rate too high to defeat inflation, is poised to deliver another 50 basis points interest rate hike next Wednesday. The U.S. central bank is expected to raise its policy interest rate by an additional half a percentage point in July. The Fed has hiked the overnight rate by 75 basis points since March.

The government reported last Friday that nonfarm payrolls increased by 390,000 jobs in May, with the unemployment rate holding steady at 3.6% for a third straight month. Economists expect the jobless rate to decline in the coming months.

The claims report showed the number of people receiving benefits after an initial week of aid was unchanged at 1.306 million during the week ending May 28. The so-called continuing claims are at levels last seen at the end of 1969. The insured unemployment rate held at a record low 0.9% at the end of May. 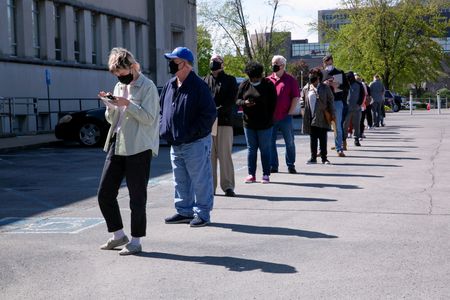