The United States faced serious challenges in obtaining medical equipment during the COVID-19 epidemic and now faces severe bottlenecks in a number of areas, including semiconductor chips, stalling production of cars and other goods.

The White House has repeatedly sought to increase domestic production of such items but has struggled to alleviate the supply crunch.

“Ultimately we need to think of it in the context of a national priority around security… a large part of the emphasis for me and then the discussion was about what it means in terms of the needs of families but also the needs of workers,” Harris said.

It was unclear what specific commitments or partnerships Harris was able to strike with the companies on Tuesday. On Monday, she announced an initiative that includes starting a U.S.-Singapore dialogue on building supply chains.

U.S. President Joe Biden ordered the review of critical supply chains in February, requiring executive agencies to report back within 100 days on risks to U.S. access to critical goods like those used in pharmaceuticals as well as rare earth minerals, for which the United States is dependent on overseas sources.

In June, the White House offered little in the way of new measures to immediately ease chip supply shortages. https://reut.rs/2WhdyOI 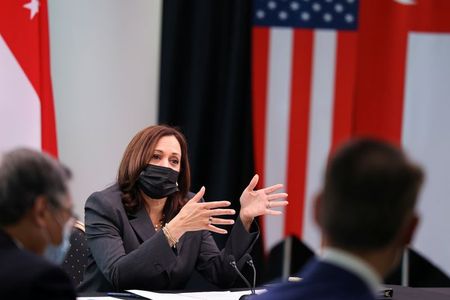 Room with a view: Investors check out Italy’s top hotels

U.S. homebuilder confidence rises in May