WASHINGTON (Reuters) -The Democratic head of the U.S. Senate Banking Committee, Sherrod Brown, is prioritizing legislation that would set a national cap on how much lenders can charge in interest, he told Reuters, as he ramps up pressure on abusive lending practices.

Brown hopes to build on his victory this month in repealing a rule introduced under former President Donald Trump’s administration that consumer advocates said allowed payday and other high-interest lenders to circumvent state interest rate caps.

“The next step is going to be putting a national cap on interest rates,” Brown, a consumer champion and Wall Street critic, said in an interview. “This is a continued fight.”

The Ohio lawmaker pointed to legislation he and fellow Democratic Senator Jack Reed introduced during the previous Congress, when Democrats were in the minority in the Senate, which would establish a national interest rate cap of 36%.

While that failed to gain traction, Brown said he believes he has a better chance of winning the 60 votes needed now that Democrats control the Senate, albeit narrowly, for the first time since 2015.

“Enough people wronged by payday lenders have told their stories in Congress. It’s a better time,” he said.

Senator Pat Toomey, the committee’s senior Republican, would oppose any such legislation, according to a spokesperson. And an industry group representing payday lenders said such a cap would effectively eliminate small dollar loans by making them unprofitable.

While the median interest rate on small-dollar loans is between 25% and 38%, rates on some short-term loans of hundreds of dollars can be as high as 251%, trapping low-income borrowers in debt, according to the Consumer Federation of America.

Earlier this month, the Senate voted 52-47 to repeal the “true lender” rule finalized by the Office of the Comptroller of the Currency by its Republican leadership last year. The bank regulator said the rule cleared up a murky legal issue around bank and fintech partnerships.

But Democrats and consumer advocates said it allowed predatory lenders to skirt state usury laws by partnering with national banks that are generally subject to looser interest rate rules. Three Republicans joined Senate Democrats in voting to kill the rule via the Congressional Review Act, a 1996 law that allows Congress to rescind recently completed regulations with a simple majority vote.

The resolution must now pass the House of Representatives, which is also controlled by Democrats. Brown’s counterpart there, Maxine Waters, said last week she wants to take it up as soon as possible.

The Senate is unlikely to vote, however, on a resolution introduced in March to undo another Trump-era rule, said Brown.

He said it was unclear if the Senate had the time or support to repeal the Securities and Exchange Commission (SEC) rule raising the threshold at which investors can force a shareholder vote. The SEC said the rule needed to be modernized, but Democrats said it stifled shareholder activism.

The cutoff for the Senate to consider further resolutions to undo Trump-era rules is Thursday, according to advocacy group Public Citizen. 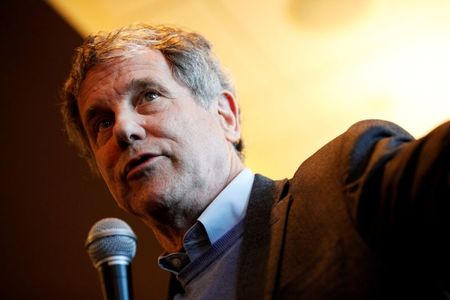 Macy’s forecasts strong 2022 after holiday bump, to not separate online...