WASHINGTON (Reuters) – The Biden administration on Monday set a goal of reducing the cost of producing clean hydrogen, a fuel that could reduce dependence on others that emit greenhouse gases that cause climate change.

The Department of Energy (DOE) set a goal for hydrogen made with clean power, such as renewables and nuclear energy plants, by 80% to $1 per kilogram in a decade.

“Clean hydrogen is a game changer,” U.S. Energy Secretary Jennifer Granholm said in a statement. “It will help decarbonize high-polluting heavy-duty and industrial sectors, while delivering good-paying clean energy jobs and realizing a net-zero economy by 2050.”

It was the first of a series of DOE initiatives to accelerate and innovate in clean energy called Energy Earthshots intended to help the economy reach that emissions goal.

Hydrogen can be used in fuel cells that have byproducts of water and heat instead of carbon dioxide, the main greenhouse gas. It has long been used as rocket fuel, in oil refining and to produce ammonia for fertilizers.

So-called green hydrogen, made by using renewable energy to power electrolysers to extract it from water, is backed by many governments for use in vehicles, ships and energy plants, but is currently too costly.

Today https://www.reuters.com/article/us-energy-hydrogen-explainer/explainer-why-green-hydrogen-is-finally-getting-its-day-in-the-sun-idUSKBN28K3DA, however, the gas is mostly extracted from natural gas or coal, called grey hydrogen, in processes that emit large amounts of carbon dioxide.

The DOE issued a request for information on viable hydrogen demonstrations with requests due on July 7. 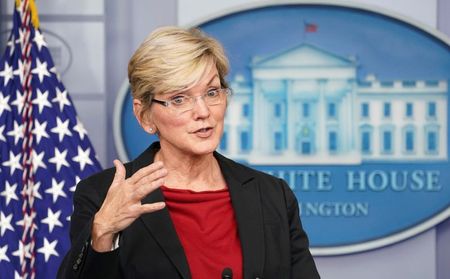