By Katanga Johnson and John McCrank

WASHINGTON (Reuters) – Gary Gensler, chair of the U.S. markets watchdog, has asked his staff to recommend rules for ensuring fair competition between exchanges and brokers, signaling a potentially major shake-up for the U.S. equities markets.

The Securities and Exchange Commission (SEC) rules would address “payment-for-order-flow,” “best execution” and the “national best bid and offer,” among other structural issues, he told a virtual conference on financial technology and global markets at Piper Sandler on Wednesday.

The aim was to make markets as efficient as possible, Gensler said.

Payment-for-order flow, whereby wholesale market makers pay broker-dealers to send them client orders which they execute on their own trading platform or a third-party platform, raises a number of conflict-of-interest questions, he said.

Critics say it creates an incentive for brokers to send orders to whichever market-maker pays them the highest fees, rather than the venue that might get the best deal for customers, also known as “best execution.”

“Are customers getting best execution in the context of that conflict? Are broker-dealers incentivized to encourage customers to trade more frequently than is in those customers’ best interest?” Gensler asked during his speech.

The SEC review follows January’s Reddit rally during which retail investors coordinating on Reddit and trading through low-cost brokerages drove up GameStop and other “meme stocks.”

Amid the intense volatility, several retail brokers restricted trading in the affected stocks, which took the steam out of the rally, causing an uproar among retail traders.

Robinhood, an online retail brokerage, said on Wednesday that it looks forward “to engaging” with SEC as the agency considers changes to equity market structure.

The saga also highlighted the small number of market-makers that dominate the retail market, with Citadel Securities executing roughly 47% of all U.S.-listed retail volume, according to its own data. That could pose competition issues, said Gensler.

“Market concentration can deter healthy competition and limit innovation. It also can increase potential system-wide risks, should any single incumbent with significant size or market share fail,” he said.

Gensler’s planned review would see the new chair wade into the fraught issue of off-exchange trading and whether these so-called dark pools are distorting the overall price discovery mechanism, a question the SEC has grappled with in the past.

With nearly half of trading happening away from traditional exchanges or “lit markets,” the national mechanism for establishing the best price for a stock, also known as the “national best bid and offer,” may have been distorted, he said.

That migration to off-exchange markets has been driven in part by market-makers’ ability to offer fractional sub-penny price improvement on bids and offers, whereas exchanges have to trade in pennies — creating an unleveled playing field, he said.

“The current market structure has created a limited set of middlemen through whom a significant amount of volume flows,” said Steve Sosnick, Chief Strategist at Interactive Brokers.

“It is not clear to Mr. Gensler that the evolution has all been favorable to investors.” 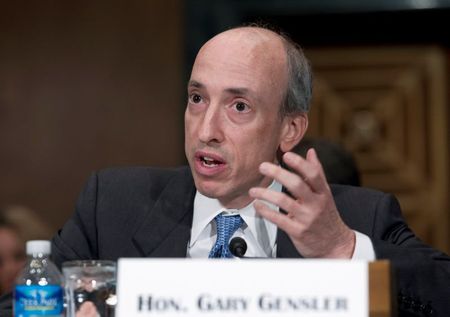 Musk says Twitter has to show spam accounts less than 5% for deal to...

NY Fed’s Williams says Treasury market needs to be shored up for next big...

Volkswagen in talks with pre-IPO investors for battery unit – sources