WASHINGTON (Reuters) -The Biden administration on Tuesday escalated a simmering trade dispute with Canada over dairy import quotas, requesting that the first dispute settlement panel under the U.S.-Mexico-Canada Agreement be formed to review the matter.

The U.S. Trade Representative’s office said its complaint alleges that Canada was improperly allocating USMCA tariff-rate import quotas on 14 dairy products, diverting a portion of them to Canadian processors and unfairly limiting export opportunities for U.S. dairy farmers and processors.

USTR first requested https://reut.rs/3qBA2V0 consultations with Canada on the matter in December, when former President Donald Trump’s administration was still in office. USTR officials said that Canada had been “responsive” in discussing the U.S. concerns but that the dispute was not resolved.

USTR claims that Canada is illegally reserving a portion of those quotas for Canadian processors.

“Canada is disappointed that the United States has requested a dispute settlement panel,” Canadian Trade Minister Mary Ng said in a statement,” adding the country is confident its policies “are in full compliance” with its tariff-rate quota obligations.

A dispute panel will take about 30 days to form under the USMCA’s dispute settlement system, and is due to file an initial report within about 120 days, with a final report 30 days after that – about late November.

USTR officials said that a ruling in the United States’ favor would lead to further consultations with Canada to resolve the matter but could ultimately lead to punitive tariffs imposed on imports from Canada.

“A top priority for the Biden-Harris Administration is fully enforcing the USMCA and ensuring that it benefits American workers,” U.S. Trade Representative Katherine Tai said in a statement.

“Launching the first panel request under the agreement will ensure our dairy industry and its workers can seize new opportunities under the USMCA to market and sell U.S. products to Canadian consumers.” 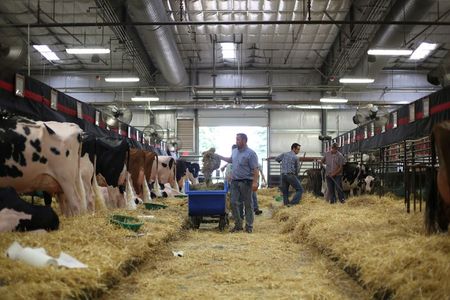 By Christian Akorlie and Cooper Inveen ...