WASHINGTON (Reuters) – Sales of new U.S. single-family homes surged to a seven-month high in November, boosted an acute shortage of previously owned homes on the market, but soaring house prices are an obstacle for first-time buyers.

New home sales increased 12.4% to a seasonally adjusted annual rate of 744,000 units last month, the highest level since April, the Commerce Department said on Thursday. October’s sales pace was revised down to 662,000 units from the previously reported 745,000 units.

Sales rose in the densely populated South as well as in the West and Northeast, but fell in the Midwest.

Economists polled by Reuters had forecast new home sales, which account for more than 10% of U.S. home sales, rising to a rate of 770,000 units.

The National Association of Realtors said on Wednesday that the inventory of previously owned homes fell to an eight-month low in November.

Houses under construction made up 62.9% of the inventory, with homes yet to be built accounting for about 27.4%.

There is a record backlog of houses authorized for construction but not yet started, according to government data published last week. Builders are struggling with worker shortages, expensive materials and delays getting supplies.

At November’s sales pace it would take 6.5 months to clear the supply of houses on the market, down from 7.1 months in October. 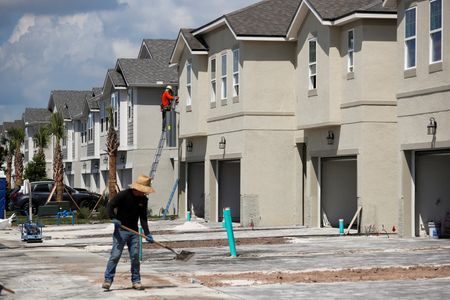