Home Stock Sectors U.S. job losses continue to be a major concern for the stock... 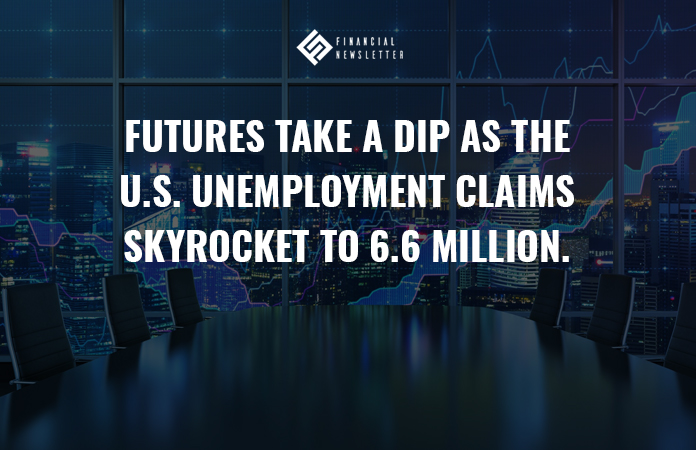 As the Trump government is taking tough measures to control the Coronavirus outbreak in the country, with the complete shutdown of businesses and factories, the weekly new unemployment claims in the  U.S. has almost doubled to hit a number of 6.6 million, for the second consecutive time in the previous week.

Although experts had reckoned that the market had priced in job losses with an expected annualized contraction in the U.S. GDP range, the stock market is in a state of panic with the rising claims of unemployment in the country. To what has been a major blow to the stock market and the global economy, the Coronavirus crisis has led to a further dip in the U.S. stock markets, with the U.S stock index futures taking a dip on Thursday. While the U.S. authorities are having a  tough time fighting the pandemic, the Dow Jones Futures slipped by 0.03 percent, while the S&P stocks fell by 0.2 percent and the Nasdaq fell by 0.3 percent.

The U.S. stock futures bounced showed irregular positive trends in European trading, before taking a static dip after the report of the number of Americans seeking unemployment benefits in the last three weeks showed the number had topped 15 million. “America is now in recession and as it appears to deepen, the question is how long it will it take before the US recovers,” said Beth Ann Bovino, the chief US economist at S&P Global Ratings in New York.

According to reports, the U.S. economy saw a job loss of almost 701,000 in March, which is the highest since the Great Recession. As the experts expect the unemployment rate to spike to 14% in April, and the U.S. having the highest number of confirmed COVID-19 cases in the world, the market would surely take a lot of time to turn around.

Explainer: What to watch at the fifth plenum of China’s Communist Party

Next up for retailers: A big wave of gift returns

Novavax COVID-19 shot could be cleared for U.S. use by May: CEO

Exclusive: Drugmakers to hike prices for 2021 as pandemic, political pressure...

Novavax COVID-19 shot could be cleared for U.S. use by May: CEO