(Reuters) -U.S. household wealth jumped to a record $136.9 trillion at the end of March, a report from the Federal Reserve showed on Thursday, suggesting plenty of dry tinder for economic growth as the coronavirus pandemic recedes and the nation reopens.

Balances in cash, checking accounts, and savings deposits swelled by about a combined $850 billion in the first quarter to a record $14.5 trillion, the report showed, bolstered by massive government aid aimed at blunting the economic fallout from the pandemic and bridging families to the other side of the crisis.

The Fed report provides overall figures and does not shed light on the large differences between higher-income families versus poor ones, and those with jobs and those without.

Still, it underscores the extra spending power at hand for U.S. families overall this quarter and beyond as COVID-19 cases continue to fall, and newly vaccinated Americans venture out and states lift their remaining pandemic-era restrictions. Economists project GDP growth this year will be the fastest in decades.

The resurgence in economic activity, coupled with bottlenecks for key materials like semiconductors and widespread reports of companies unable to fill jobs, is pushing upwards on inflation, though Fed officials expect that to be temporary.

Higher bank account balances reflected the $600 checks sent to most Americans under a pandemic aid package signed by former President Donald Trump in late December, as well as the bulk of the $1,400 checks that were part of President Joe Biden’s relief package in March.

The combined aid of the two packages totaled $2.8 trillion and included money for small businesses and local governments, as well as an extra $300 in weekly aid to the unemployed, though anything disbursed after March won’t show up until the Fed’s next quarterly report.

The report showed overall household debt rose in the first quarter at an annualized rate of 6.5% compared to a 6.2% rise in the fourth quarter, as home mortgage borrowing accelerated. Households held $11 trillion in home mortgages as of March 31.

Non-financial business borrowing accelerated to a 4.4% annualized rate, up from a 1.1% pace in the previous quarter, reflecting an increase in corporate bonds, the Fed said.

Government borrowing rose at a 6.5% annualized rate versus 10.9% in the prior quarter.

(Reporting by Ann Saphir and Dan BurnsEditing by Paul Simao) 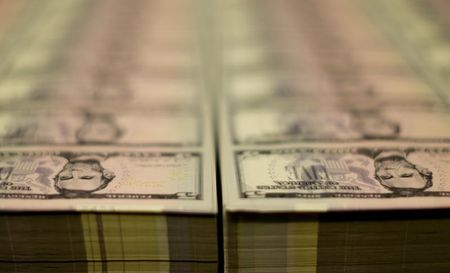