By Chris Kirkham and Ankur Banerjee

(Reuters) – The U.S. Food and Drug Administration said on Thursday it needs more time to decide whether e-cigarette maker Juul Labs Inc and other major manufacturers can sell their products in the United States.

The agency had been expected to make a decision by Thursday, a year after Juul and other e-cigarette brands, including British American Tobacco Plc’s Vuse and Imperial Brands Plc’s Blu, faced a deadline to file applications showing their products provided a net benefit to public health.

A federal judge set a September 2020 deadline for the e-cigarette makers and gave companies a one-year grace period to remain on the market without FDA enforcement, while the agency reviewed applications.

The agency on Thursday said it continues to “work expeditiously on the remaining applications,” adding many are “in the final stages of review.”

It said products that have not been authorized by the FDA – a category that now includes Juul after the one-year grace period – “are subject to enforcement action at the FDA’s discretion.”

The agency said it will work “as quickly as possible to provide regulatory certainty” and is prioritizing enforcement of e-cigarette products that have not applied for FDA authorization.

The FDA’s scientific review of e-cigarettes will decide whether they are effective in getting smokers to quit and, if so, whether the benefits to smokers outweigh the health damage to new users – including teenagers – who never smoked.

E-cigarettes have operated in a regulatory gray area for years. The products, which vaporize a nicotine-laced liquid, have been available in the United States since at least 2007, but the FDA did not formally get jurisdiction over the industry until May 2016.

During that time, Juul and dozens of competitors introduced products that were grandfathered into the market because they were already being sold before the regulation took effect.

The 2016 rule required e-cigarette makers to file extensive applications to the FDA by August 2018 demonstrating the public health benefits of their products, along with data on potential toxins.

Under the administration of Donald Trump, the FDA pushed back the application date to 2022, but public health groups sued in federal court and succeeded in getting the deadline moved up to last year.

In June, FDA acting Commissioner Dr. Janet Woodcock told a congressional panel the agency had received applications for 6.5 million products from more than 550 companies, and said reviewing all submissions by Sept. 9 “will be challenging.”

In August, the agency denied marketing applications for nearly 55,000 flavored e-cigarette products from three small companies for failing to provide evidence they appropriately protect public health. The FDA has so far denied applications from more than 100 companies, but has not made a decision on Juul or other major tobacco industry players.

A Reuters investigation in 2019 detailed how Juul’s developers used tobacco industry research and patents to formulate a smooth but potent blend of liquid nicotine that became a key factor in its popularity among teenagers. (https://reut.rs/3hgWDmI)

Facing a backlash from parents, teachers and regulators, including state attorneys general, Juul stopped selling its popular fruit- and mint-flavored nicotine pods in 2019, ahead of an FDA ban on such flavors in early 2020.

Over the last two years, Juul has tried to repair its relationship with regulators and the public by taking a lower profile. It stopped print, TV and online advertising in 2019, and pulled back on its international expansion plans to focus on winning regulatory approval in the United States.

Federal survey data from last year showed that Juul’s popularity among teenagers declined significantly from 2019, but was offset by increases in teenage use of other brands. Juul was still the most popular brand among teenagers, according to the survey.

(Reporting by Ankur Banerjee in Bengaluru and Chris Kirkham in Los Angeles; Editing by Anil D’Silva and Bill Berkrot) 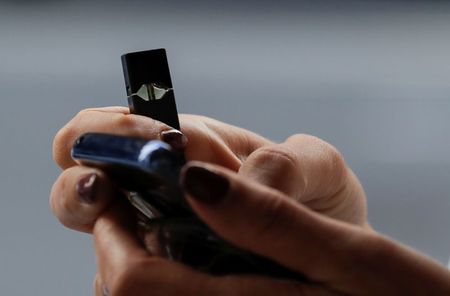 GSK, iTeos to develop cancer drug in up to $2 billion...