WASHINGTON/MEXICO CITY (Reuters) -The United States on Tuesday downgraded Mexico’s aviation safety rating, an action that bars Mexican carriers from adding new U.S. flights and limits the ability of airlines to carry out marketing agreements with one another.

Over the objections of the Mexican government, the U.S. Federal Aviation Administration announced the downgrade and said it would increase scrutiny of Mexican airline flights to the United States.

The U.S. air regulator added it is “fully committed to helping the Mexican aviation authority improve its safety oversight system to a level that meets” international standards. The agency also said it is “ready to provide expertise and resources” to resolve issues raised in the safety assessment process.

The FAA downgraded Mexico – the most common international destination for U.S. air travelers last month – from a level called Category 1, which signifies compliance with international standards, to Category 2, the lowest level.

Mexico’s government said on Tuesday it is determined to recover a Category 1 air safety rating quickly.

“I think it will be a relatively quick and easy process,” deputy transport minister Carlos Moran told Reuters. “I hope it is less than three months.”

The Category 2 rating, according to the FAA, means Mexico lacks “necessary requirements to oversee the country’s air carriers in accordance with minimum international safety standards, or the civil aviation authority is lacking in one or more areas such as technical expertise, trained personnel, record keeping, inspection procedures or resolution of safety concerns.”

Mexico’s air transportation industry group Canaero said the downgrade will “severely affect” the sector’s recovery from the effects of the COVID-19 pandemic and trade with the United States but it does not expect the action to impact existing operations of Mexican airlines.

Moran, in the interview with Reuters, ruled out government support for struggling airlines.

A similar FAA downgrade of Mexico in 2010 over suspected shortcomings within its civil aviation authority lasted about four months. Only a few countries are currently rated Category 2 by the FAA, including Bangladesh, Pakistan, Thailand and Malaysia.

Reuters first reported plans for the FAA downgrade on Friday and that the downgrade had been finalized Tuesday.

The FAA review that began in October and went through February found about two dozen noncompliance issues and Mexico had only resolved four, officials said.

Mexico has been a top vacation spot for U.S. travelers during the pandemic, spurring U.S. airlines to redirect capacity they had previously flown to Europe before transatlantic travel restrictions were imposed last year. Nearly 2.3 million passengers traveled on U.S.-Mexico flights in April – more than three times the next most-popular country destination.

The downgrade means U.S. airlines will no longer be able to market and sell tickets with their names and designator codes on Mexican-operated flights.

Delta Air Lines said on Tuesday an FAA downgrade was not about its partner Aeromexico and that the action will have little impact on customers.

Delta said it will need to reissue reservations for some Aeromexico operated flights that were booked through Delta.

Unlike Aeromexico, Delta will be able to continue increasing routes and frequencies as demand recovers, said Rene Armas Maes, commercial VP and associate at Midas Aviation.

It is yet to be seen if Apollo Global Management and the holders of Aeromexico’s $400 million 7% bond due 2025 will seek any changes to the terms of the $1 billion debtor in possession loan they granted to the airline, said Armas Maes. 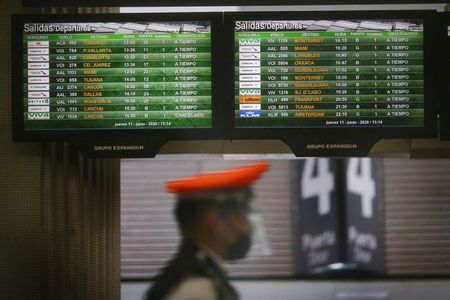 Amazon to create 1,500 jobs in UAE this year

Bubbles, bubbles everywhere: Jeremy Grantham on the bust ahead