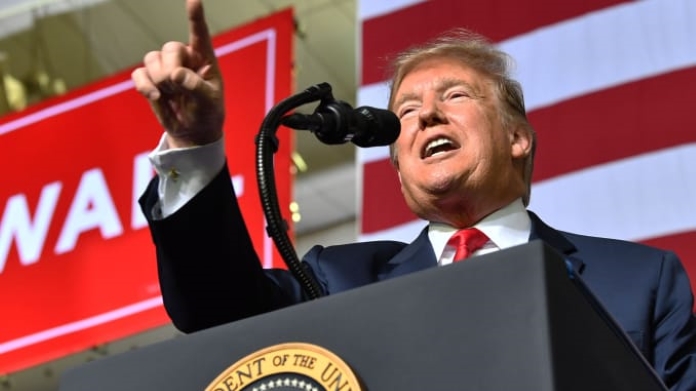 The tanking stock market is constantly worrying Trump regarding his chances of re-election. Due to such forecasts, Trump wishes to restart the US economy without any further delay amidst this COVID-19 crunch.

According to reports, Trump has been in talks with experts of the domain and some GOP analysts on whether the restrictions on American economic life should be removed or not. The prime reason why he has been thinking of this is because the restrictions are downscaling the entire economy and the rate of unemployment is constantly on the rise. Reportedly, Trump has received numerous phone calls from business leaders who were extremely nervous about the present scenario.

Advisors are also pushing Trump to wade off all the restrictions and let people start their normal life. This will resume the economic cycle and the country will possibly start regaining on the lost ground. On Monday, the President further stated that the entire economy of the country could well be resumed to normalcy in the next week itself. According to his recent tweet, Trump says that the cure cannot overweight the problem itself and at the end of the 15 days the government will decide on which way to go in the coming days.

The stock market has crashed since the Coronavirus struck US shores. More than 30,000 people have been infected with the virus and there’s no cure for it till now. Small businesses throughout the nation have shut down operations and every one in three individuals are asked to stay indoors to curb the spread of this virus. The DOW Jones index has lost 37% of gains in comparison to its all-time high in the mid-February period. All the gains made after Trump joined as the President has been wiped off the market and the fall is continuing daily.

On Monday the index lost another 538 points as the congress failed to come to a common consensus regarding the $1.8 trillion package on offer from the government to boost the economy. As per experts, the disastrous momentum of the market is worse than the 2008 crisis and it will create a record in history for sure. The economic crisis that comes out of the heath danger is extremely high and has the power to bring the global economy to its knees in the days to come. While China is slowly recovering from the spread of this virus, other countries are reeling hard to stand up and beat it down. As far as anti-dote is concerned, no new developments have been recorded which in itself is a serious news. All of this will push back the US economy to a major extent and hence the chance of Trump’s re-election is slowly fading out of contention at this moment.

‘A disaster’: Roche CEO’s verdict on some COVID-19 antibody tests

By Krystal Hu and Chavi Mehta ...

Uber says it is fit and proper in battle to win...