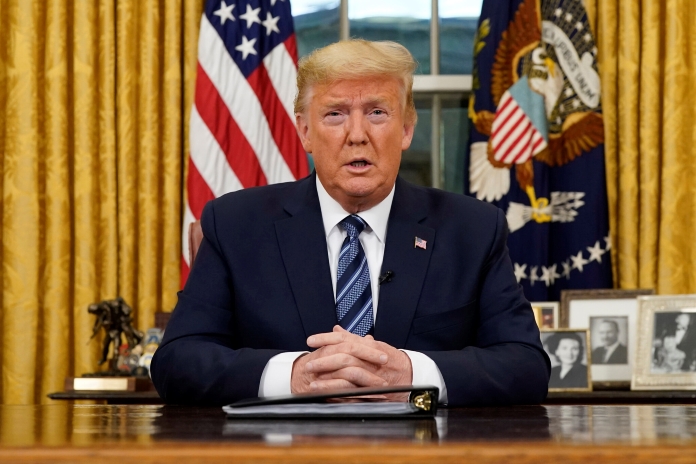 Just after President Donald Trump announced that travel between a dozen of European cities and the US will be suspended for 30 days, the US stock futures took a huge dip. This is a measure taken to stall the spread of novel coronavirus any further in the US.

DOW futures have taken a drop by 1000 points or 4.3% while the S&P 500 futures are down by 4.1%. On the other hand, NASDAQ (COMP) plummeted by 4.2%. Not just the US stocks, the European markets have also faced a huge drop since the announcement by Donald Trump. London’s FTSE 100 shed around 5%, Germany’s DAX dropped 5.4% and France’s CAC 40 slipped by a massive 4.5%! Italy’s benchmark stock index had already faced a drop of 18% this week and yet another 5.9% was added to the loss at the open of the day.

The travel suspension announced by Trump is slated to begin this Friday at midnight. It extends to the countries in the Schengen zone which includes Italy, France, Spain, Germany, and 22 other countries. Luckily, the United Kingdom is not included in this exhaustive list of restricted travel.

The markets in Asia were no different as they slumped lower after the announcement from Trump. The Shanghai Composite Index (SHCOMP) finished the day with -1.5%. Australia’s S&P/ASX 200 entered the bear market on Wednesday and further sank by 7.4%. South Korea’s KOSPI index fell by 3.9% while Hong Kong’s Hang Seng Index (HSI) fell by 3.6%. Both the markets are near the bear market territory and soon will step into it if the market keeps dropping at the current rate.

The Brent Crude futures, regarded as the Global oil benchmark, plummeted by 5% approximately which brought down the price to $34.03/barrel.

At this moment, investors see no sight of relief in the market and this is why everyone is hitting the sell button faster than ever before in fear of losing more of their money. Traders believe that the US government has just skipped a beat or two in responding to crisis and understanding the gravity of the matter. And now, this is too late to respond!

Initially, Trump’s announcement sowed certain confusion. The entire US waited with bated breath to get a clarification on whether the travel ban pertains to goods or not. If it were so, the trade would have been extremely hit and the economy would further go down. However, on a subsequent tweet, the US President clarified that the restriction is on people traveling and hence goods will not be impacted in any way.

According to experts, the lack of concrete measures to rectify the market was the major reason why the US stock market entered the bear territory. The number of virus-infected keeps taking a rise and the concerns are only growing deeper every passing day.

Analysis: Will this time be different? Investors question the Treasury yield...