By Min Zhang and Shivani Singh

“For now, it’s hard for any steel firm to realize low-carbon transition on their own,” said Baowu Vice General Manager Hou Angui at the event. Hou was also named secretary general of the alliance.

The alliance hopes to advance technological cooperation, and promote engineering and industrialization of low-carbon techniques, according to Baowu.

China, which aims to bring carbon emissions to a peak by 2030, emits more than 10 billion tonnes of greenhouse https://www.reuters.com/world/china/china-should-pledge-absolute-co2-emissions-cap-advisory-body-2021-09-10 gases a year. The ferrous metal sector accounts for around 15% of those.

The country pledged to limit its crude steel output this year to no more than the record 1.065 billion tonnes it churned out in 2020 to cut pollutants and emissions. Production in the first 10 months of 2021 was down 0.7% year-on-year.

“There are many ways to reach carbon neutrality in the steel sector,” He Wenbo, executive chairman of the China Iron and Steel Association told the forum.

“But the fundamental solution lies in technology,” he said, adding a plan to implement carbon neutrality in China’s steel sector had mostly been finalised and would be issued soon.

Baowu, which overtook ArcelorMittal as the world’s top steel producer in 2020 with annual output at over 115 million tonnes, had proposed setting up the low-carbon metallurgical alliance in October 2019.

The company’s average carbon intensity is 1.85 tonnes per tonne of steel produced and Baowu said it aimed to reduce that by 30% to 1.3 tonnes by 2035, achieving carbon neutrality by 2050.

To get there, Baowu said it would pursue the use of hydrogen-enriched carbon recycling blast furnaces, green hydrogen-fuelled metallurgy, large-scale use of recycled steel, carbon capture and utilization, as well as other routes.

The steel giant also announced an innovation fund with up to 35 million yuan ($5.5 million) available per year for basic research into low-carbon metallurgy. “The size is still small, but we will continue investing,” Chen said.

In July, the producer announced a 50 billion yuan “carbon neutral” fund with partners to invest in clean energy and other projects. 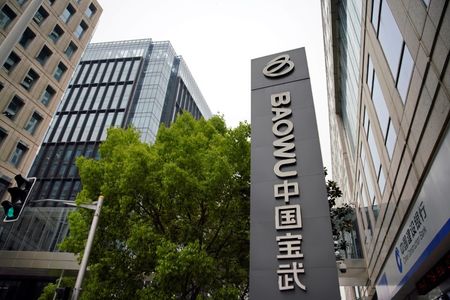 Ahead of jobs miss, some Fed officials edged towards ‘taper’ debate