Home Stock News The best week for US Stocks in 45 years even after 16... 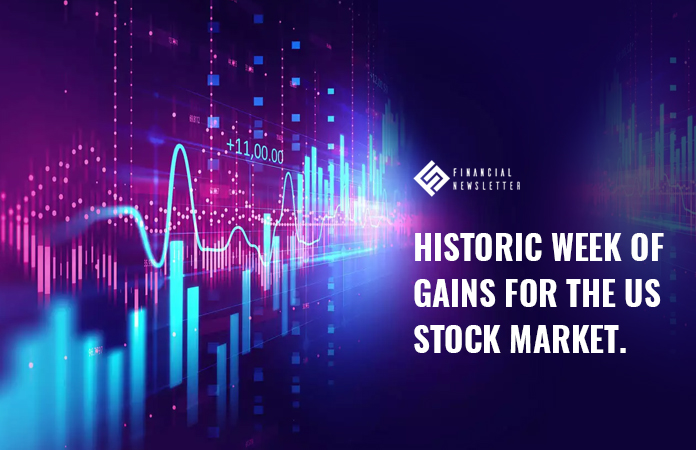 The previous week was one of the best as well as one of the worst weeks for the US Stocks and the economy. Speaking of the worst, there were 6.6 million new jobless claims put and the combined jobless claims in the last three weeks went up to 16 million! The country has 10% or more jobless claims and this is just a part of the data. It is assumed that most of the people haven’t yet put forward their claim because of the overburdened state unemployment system at work.

On the other hand, the “best” part of the week is totally a surprise for one and all. The US stock market had its best week in over 4 decades and this was at a time when the indices were sharply declining. The DOW Jones Industrial Average raked in around 12.67% of gains, S&P 500 leaped up by 12.1% while the Nasdaq composite wasn’t far behind with a gain tally of 10.59%!

What does it mean?

Well, experts believe that the stock market is yet to face the devastation of the Coronavirus outbreak. The graveness of the global pandemic isn’t realized by the market and nor the people as of yet. All the major support boosts from the congress and the actions from the Fed have kept the market in good form. However, on any given day another possible stock market decline may be triggered with some fresh data regarding the Coronavirus.

Taking into historical consideration, it is witnessed that the average performance of the stock market takes a hike when the unemployment claims take a rise. The market is priced in during such a situation so that it can come up ahead and bring back the stability in the overall economy.

The Fed has been efficient at covering the equity market risks and every step it has taken as of yet has worked in the favor of the stock market. 40% of the Americans own stocks while the 60% doesn’t and hence they will be in sole authority to maintain the economy of the state in this hour of crisis.

Explainer: Why COVID-19 can run rife in meatpacking plants