TAIPEI (Reuters) – Taiwan’s export orders grew more than expected in July and the government said the outlook for the island’s tech goods remains strong on demand for high-end chips, though it warned the spread of COVID-19 variants may further disrupt global supply chains.

Taiwan’s export orders, a bellwether of global technology demand, jumped 21.4% from a year earlier to $55.3 billion in July, data from the Ministry of Economic Affairs showed on Friday.

That was the 17th month of expansion, and the pace was faster than the median forecast of a rise of 20.85% in a Reuters poll.

The ministry attributed the performance to demand for 5G telecom equipment and semiconductors.

Demand for electronics like laptops to support the “home economy” also remained strong, with the COVID-19 pandemic still restricting the movement of millions around the world, theministry added.

Taiwan companies such as Foxconn and Taiwan Semiconductor Manufacturing Co Ltd (TSMC) are major suppliers to Apple Inc and other global tech firms.

The ministry warned of uncertainty over the spread of COVID-19 variants around the world, saying that tighter anti-virus measures in some countries were impacting supply chains.

However, it saw upside in countries speeding up COVID-19 vaccinations, plus continued strong demand for 5G and the auto sector, which has been badly affected by a shortage of chips.

It expects export orders in August to rise between 20.9% and 24.2% from a year earlier.

Orders from the United States jumped 16.5% in July from a year earlier, a slower rate of expansion compared with the 24% logged in June, while orders from China were up 20.1%, versus a gain of 36.7% the previous month. 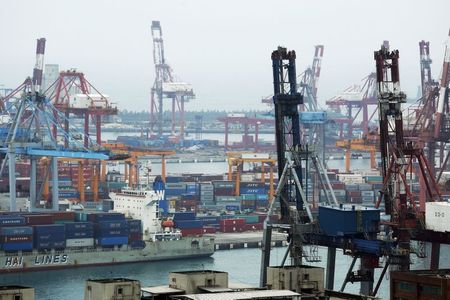 Exclusive: U.S. ban on TikTok could cut it off from app stores, advertisers –...

Learjet, the private plane synonymous with the jet-set, nears end of...