Zurbruegg, who recently returned to work after being treated for a heart condition, will retire at the end of July 2022 after a decade on the SNB’s monetary policy-setting governing board.

The 61-year-old joined the board in August 2012 and has been closely involved, along with fellow board members Chairman Thomas Jordan and Andrea Maechler, with the SNB’s campaign to restrain the appreciation of the safe-haven Swiss franc.

During his time at the SNB, its balance sheet has more than doubled to more than $1.1 trillion as it sold francs and bought foreign currencies, while the central bank has introduced the world’s lowest interest rate of minus 0.75%.

“Fritz Zurbruegg’s activities at the SNB have been shaped by the low interest rate environment worldwide, various international crises and the extraordinary measures the SNB has had to take to ensure price stability,” the SNB said https://www.snb.ch/en/mmr/reference/pre_20211206/source/pre_20211206.en.pdf in a statement.

His first position at the SNB was to lead its Department III, which is responsible for financial markets, banking operations and information technology.

There Zurbruegg was responsible for the operational implementation of the SNB’s monetary policy when it riled the global currency markets when it ended its minimum exchange rate against the euro in Jan. 2015.

The currency peg was replaced by negative interest rates and forex purchases to counter the strength of the Swiss franc.

Since July 2015, Zurbruegg has been in charge of the SNB’s Department II, which oversees financial stability, cash, finance and risks.

Experts said they did not think Zurbruegg’s retirement would lead to a shift in the SNB’s ultra-expansive monetary policy. The bank is due to give an update on Dec. 16.

“I don’t think there will be any changes, as the policy is decided by all three members of the governing board,” said UBS economist Alessandro Bee.

Zurbruegg’s decision to step aside was a “private decision”, an SNB spokeswoman said, declining to give further detail.

The SNB did not name a successor. His replacement will be chosen by its banking council most likely next year. 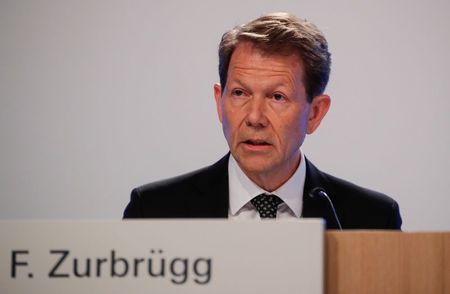 Google to build new undersea cable to connect Latin America and the U.S.

German Pharma-Park Marburg, home to BioNTech, up for sale -sources