BERLIN (Reuters) -A lack of semiconductors, timber and other intermediate goods drove an unexpected fall in German industrial output in April, a further sign that massive supply bottlenecks are hampering the recovery in Europe’s largest economy.

The Federal Statistics Office said industrial output dropped 1.0% on the month after a downwardly revised increase of 2.2% in March. A Reuters poll had pointed to a 0.5% rise in April.

The drop in the headline figure was driven by a decrease in consumer goods production of more than 3% and a plunge in construction activity of more than 4%.

The weaker than expected industrial figures suggest that the German economy will have to rely on household spending to support a still-fragile recovery from the coronavirus crisis.

“Such a combination is unparalleled: Order books in industry are well filled and production is falling,” VP Bank economist Thomas Gitzel said, adding that the supply problems with semiconductors were pushing down output in the car industry.

So despite well-filled order books, manufacturing will only make a limited contribution to overall economic growth in the second quarter, Gitzel said.

The economy ministry said industrial output was being hampered by supply bottlenecks for intermediate products such as semiconductors and timber. But it added that business sentiment surveys were suggesting an improvement in coming months.

Germany’s Ifo business sentiment brightened in May to hit a two-year high as COVID-19 curbs were eased and infections fell, suggesting a swift summer recovery after the economy shrank more than expected in the first quarter.

Investor sentiment in Germany fell in June but remained at a high level and expectations for a strong economic recovery for the next six months are intact, a survey by the ZEW economic research institute showed on Tuesday.

The ZEW’s survey of investors’ economic sentiment fell to 79.8 points from 84.4 in the previous month. But a separate ZEW gauge of current conditions surged to -9.1 points from -40.1.

“The economic recovery is progressing,” ZEW President Achim Wambach said in a statement. “The decline in expectations is probably largely due to the considerably better assessment of the economic situation, which is now back at pre-crisis levels.”

“The financial market experts therefore continue to expect a strong economic recovery for the next six months,” he added.

Andrew Kenningham of Capital Economics said the chip shortages were likely to continue to constrain the recovery but that it should be a temporary problem.

Industrial output should recover somewhat in May and June which should enable overall economic growth of at least 1% in the second quarter, Kenningham added.

In the first quarter, German GDP contracted by 1.8% on the quarter and by 3.1% on the year, significantly weaker readings than the euro zone average.

On Monday, Chancellor Angela Merkel said at the virtual opening of a Bosch semiconductor plant in Dresden that the chip shortages in manufacturing were complicating Germany’s economic recovery from the coronavirus crisis.

The problem has forced many German companies to announce short-time work and scale back production, with the scarcity of components also expected to lead to higher end-prices for consumers and overall inflationary pressures. 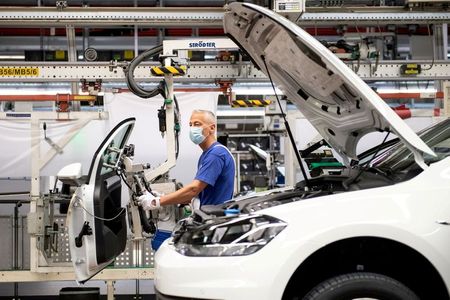 Cryptoverse: Bleeding bitcoin’s holding out for a hero

Amazon to charge merchants 5% surcharge for fulfillment services as fuel...

Engine No. 1 extends gains with a third seat on Exxon...