By Michael Nienaber and Rene Wagner

BERLIN (Reuters) – German business morale brightened to hit a two-year high in May as COVID-19 curbs were eased and infections fell, heralding a swift summer recovery after the economy shrank more than expected in the first quarter.

With many firms reporting a build-up of supply bottlenecks, Tuesday’s Ifo business climate index readout showed a jump to 99.2, up from April’s revised 96.6 and beating the 98.2 forecast in a Reuters poll of analysts.

The survey among some 9,000 firms in manufacturing, the service sector, trade and construction showed that businesses were more satisfied with their current situation and optimistic regarding the coming six months.

It pointed to a quarterly growth rate of 2.6% from April to June and 2.8% from July to September, Ifo economist Klaus Wohlrabe told Reuters.

In the first quarter, GDP contracted by 1.8% quarter on quarter and by 3.1% on the year, significantly weaker readings than the euro zone average, Federal Statistics Office data showed earlier on Tuesday.

Coronavirus curbs in force during those months also spurred consumers to put more money than ever into savings, with the savings rate ballooning to an unprecedented 23.2%.

German households’ disposable income increased slightly as the government ploughed billions of euros into job protection schemes and extra child benefits, but household spending fell by 5.4% on the quarter as curbs linked to containing the pandemic crimped consumption.

VP Bank Group economist Thomas Gitzel called that drop “colossal”, but also said falling infection rates and progress in inoculations meant the economy would soon be back on a healthier footing as restrictions were eased and then lifted altogether.

“We’re heading towards a relaxed summer in which retailers in German cities can expect consumers to splash out,” he said.

Company investments in machinery and equipment fell slightly in the first quarter, though construction activity rose, the GDP data showed.

Wohlrabe said rising costs due to supply bottlenecks in manufacturing and construction were now increasingly being passed on.

In construction, two out of five firms reported difficulties procuring raw materials, and “more and more companies indicate that they want to increase their sales prices,” he said.

KfW bank economist Fritzi Koehler-Geib said her bank had raised its 2021 growth forecast to 3.5% from 3.3% “despite the poor start to the year.”

Commerzbank economist Joerg Kraemer said his bank continued to expect German GDP to grow by 4.0% in 2021.

“A post-corona boom is emerging – even if the air is starting to get thin in the manufacturing sector, where business sentiment is already at a very high level,” he added. 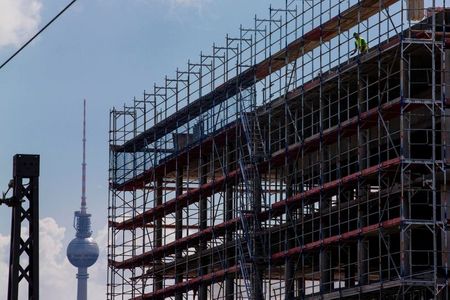 Theranos’ Holmes to be sentenced in September for fraud conviction