The National Union of Metalworkers of South Africa (NUMSA), which has around 155,000 members in the sector, has been on strike since Oct. 5 to press for higher wages, an action that could hit supplies of parts for new cars.

The strike was launched after wage talks hit a deadlock and arbitration failed, with NUMSA demanding an 8% across-the-board wage rise in the first year, and inflation plus 2% for the second and third years.

The Steel and Engineering Industries Federation of Southern Africa (SEIFSA) had offered 4.4% for 2021, inflation plus 0.5% in 2022 and inflation plus 1% in the third year.

Luxury car maker BMW said on Monday it lost production of around 700 vehicles at its main assembly plant in South Africa when a number of suppliers were affected.

“We expect more OEM assembly lines to be impacted if the strike continues into next week, due to lack of production in parts of the supply chain,” Renai Moothilal, executive director at the National Association of Automotive Component and Allied Manufacturers (NAACAM) said.

Spokespeople for Ford and Volkswagen SA said there was no impact yet on production, while BMW said it was “constantly monitoring” the situation for any changes amid reports of sporadic violent clashes between police and strikers.

At a press conference on Thursday, NUMSA said while there was broad agreement on a new three-year deal with SEIFSA, a key stumbling block on rates of pay remained.

“With SEIFSA refusing to give this 6% increase on actual rates of pay, and with conservative employer associations … refusing to bargain, we have been left with no option but to continue to strike until there is a settlement offer,” NUMSA said.

“We will regroup this morning and plot the way forward,” he said after NUMSA members rejected a new employers’ proposal.

A smaller union, the Metal and Electrical Workers Union of South Africa (MEWUSA), told Reuters that its 16,000 members in the sector had also joined picket lines, while another union UASA said it was in dispute but hadn’t yet joined the strike.

Any protracted strike will hurt South Africa’s export-focused auto manufacturing sector, which is looking to bounce back from the COVID-19 pandemic that saw exports and domestic production fall by around one third in 2020 compared to the previous year.

According to NAACAM, the broader automotive industry, which included retail and manufacturing, last year contributed 4.9% to GDP in Africa’s most industrialised economy, down from 6.4% in 2019. 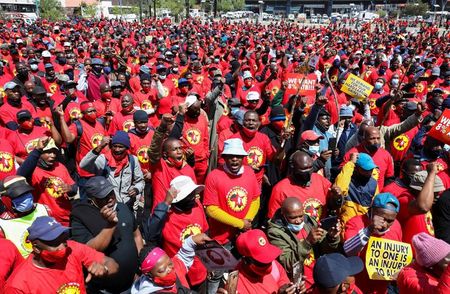 By Katanga Johnson and Michelle Price ...