LONDON (Reuters) – Stocks continued their new year rally on Monday as optimism over the global economy, inflation coming under control and China’s reopening offset concerns the Bank of Japan (BOJ) might temper its super-sized stimulus policy at a pivotal meeting this week.

The yen climbed to its highest since May after rumours swirled the BOJ might hold an emergency meeting on Monday as it struggles to defend its new yield ceiling in the face of massive selling, sending the dollar to a seven-month low.

Yet away from those concerns that the BOJ might be forced to abandon its decades-long attempt to stoke prices rises in the world’s third-biggest economy, investor confidence held amid tentative signs Europe’s recession could be milder than feared.

MSCI’s broadest index of Asia-Pacific shares outside Japan added 0.37%, with hopes for a speedy Chinese reopening giving it a gain of 4.2% last week.

The fragile rally in equities that has characterised the opening weeks of the year could be tested from a number of angles this week, however, as world leaders, policy makers and corporate CEOs gather for the World Economic Forum (WEF) in Davos.

Two-thirds of private and public sector chief economists surveyed by the Forum expect a global recession in 2023, the WEF said on Monday, in a sign of tougher times ahead for markets.

A host of central bankers is also set to speak this week, including nine members of the U.S. Federal Reserve.

The BOJ’s official two-day meeting ends on Wednesday and speculation is rife it will make changes to its yield curve control (YCC) policy given the market has pushed 10-year yields above its new ceiling of 0.5%.

The BOJ bought almost 5 trillion yen ($39.12 billion) of bonds on Friday in its largest daily operation on record, yet 10-year yields still ended the session up at 0.51%.

Early on Monday, the bank offered to buy another 1.3 trillion yen of JGBs, but the yield stuck at 0.51%.

“There is still some possibility that market pressure will force the BOJ to further adjust or exit the YCC,” JPMorgan analysts said in a note. “We can’t ignore this possibility, but at this stage we do not consider it a main scenario.”

The BOJ’s uber-easy policy has acted as a sort of anchor for yields globally, while dragging down the yen. Were it to abandon the policy, it would put upward pressure on yields across developed markets and most likely see the yen surge.

The dollar has been undermined by falling U.S. bond yields as investors wager the Federal Reserve can be less aggressive in raising rates, given inflation has clearly turned the corner.

The Japanese yen rose to a more than seven-month peak against the dollar on Monday, as market sentiment was dominated by expectations that the BOJ would abandon or make further tweaks to its yield control policy.

The dollar index, which measures the U.S. unit against a basket of major currencies, recovered from a 7-month low earlier in the session to 102.3.

Futures now imply almost no chance the Fed will raise rates by half a point in February, with a quarter-point move seen as a 94% probability.

Yields on 10-year Treasuries are down at 3.498%, having fallen 6 basis points last week, close to its December trough, and major chart target of 3.402%.

Alan Ruskin, global head of G10 FX Strategy at Deutsche Securities, said the loosening of global supply bottlenecks in recent months was proving to be a disinflationary shock, which increases the chance of a soft landing for the U.S. economy.

“The lower inflation itself encourages a soft landing through real wage gains, by allowing the Fed to more readily pause and encouraging a better behaved bond market, with favourable spillovers to financial conditions,” Ruskin said.

Commodities prices which had rallied last week, dipped on Monday.

The drop in yields and the dollar had benefited the gold price, which jumped 2.9% last week, but the precious metal slipped 0.2% to $1,916 an ounce on Monday. [GOL/]

Oil prices slid but held near the year’s highs as a rise in COVID cases clouded the prospects for a surge in demand as China reopens its economy. 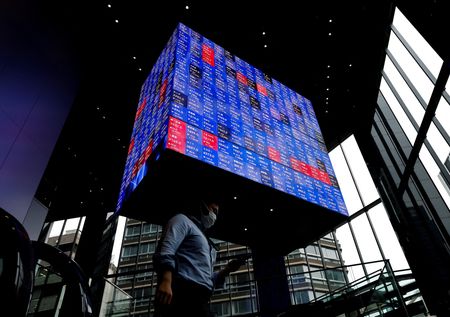 S.Korean industries face losses worth $1.2 billion due to trucker strike...