It said the plans to quit Russia announced earlier this week will have a near 350 million euro impact on annual adjusted profit, and lead to restructuring charges of about 80 million to 100 million euros.

Shares in the company fell 3% in morning trade.

Despite the impact of the Russia closure, SAP affirmed its 2022 forecast for cloud revenue of between 11.55 billion euros and 11.85 billion euros at constant currency rates.

However it also cautioned that other effects of the situation were unknown and could potentially subject its business to “materially adverse consequences” should the situation escalate beyond its current scope.

“The strong cloud momentum supports the confirmed full-year targets despite the headwind of the war in Ukraine… also keeping in mind that 1Q is traditionally the smallest quarter in the year,” said Knut Woller, analyst at Baader Helvea.

Adjusted earnings per share were 63 cents, below estimates of 1.07 euros, mainly due to a lower contribution from investments in venture capital firm Sapphire Ventures. That contribution fell 300 million euros from last year.

The company’s cloud and software revenue climbed 12% to 6.06 billion euros in the first quarter ended March 31.

Current cloud backlog, which measures incoming business, was up 28% at 9.73 billion euros. The war in Ukraine cut the backlog growth at constant currency rates by 0.8 percentage points.

That growth “continues to support our confidence in our long-term plans and outlook for the year”, Chief Financial Officer Luka Mucic said in a statement. 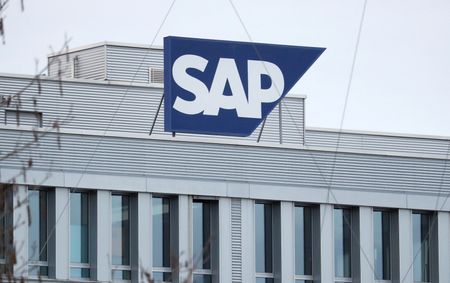 Rise in U.S. house prices to halve next year, affordability to...