LONDON (Reuters) – British supermarket group Sainsbury’s raised its full-year profit forecast by at least 9% after grocery sales over the Christmas quarter beat its expectations, even though they fell short of its stellar 2020 festive performance.

While restrictions for Christmas 2021 were less severe, supermarkets still benefited from consumer nervousness over the spread of the Omicron variant which kept them away from bars and restaurants.

Sainsbury’s shares were up 1.6% at 1000 GMT, extending year-on-year gains to 21% that have been partly buoyed by bid speculation.

Shares in market leader Tesco were up 0.3% on hopes it will also upgrade its profit outlook when it updates on Thursday.

Sainsbury’s said like-for-like sales, excluding fuel, fell 4.5% year-on-year in its third quarter to Jan. 8, having fallen 1.4% in the second quarter.

While grocery sales fell 1.1% in the third quarter year-on-year they were up 6.6% against the same period in 2019-20, before the pandemic impacted trading.

“I am really pleased with how we delivered for customers this Christmas. More people ate at home and our significant investment in value, innovation and service led to market share growth,” said CEO Simon Roberts.

Roberts said that with Britain facing a cost of living squeeze this year, Sainsbury’s was focused on providing the best value it could.

“Delivering great value for customers is at the heart of our strategy and we’ve sharpened our price positioning against our key competitors,” he said. 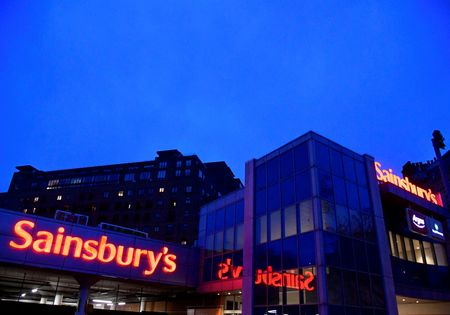 Robinhood adds three new board members ahead of planned listing