Annual consumer inflation, the central bank’s main area of responsibility, overshot expectations and accelerated to 6.0% in May, reaching its highest since October 2016 when the key rate was at 10%, data showed late on Monday.

Twenty-seven of the 29 analysts and economists polled after the inflation release said the central bank would raise the key rate to 5.50% from 5%.

The previous Reuters poll from Monday showed 19 of the 28 polled experts expected the central bank to raise the key rate by 25 basis points.

Only nine experts polled on the first day of the rate-setting week predicted the central bank to raise rates by 50 basis points, as it did in April.

“May inflation surprise favours another 50bp hike,” Deutsche Bank analysts said of the inflation reading that overshoot Reuters forecast of 5.8%.

The central bank targets annual consumer inflation of 4%. It climbed above the target in late 2020 amid global inflation and as the weaker rouble filtered into prices.

The central bank this year announced a plan to return to a neutral policy rate of 5%-6% after slashing the rate to a record low of 4.25% in 2020 to prop up the economy amid the COVID-19 pandemic and a drop in oil prices.

Rate increases became more necessary recently when the rouble took a hit from a new wave of sanctions, while inflationary expectations among people in Russia reached a four-year high and the pace of economic growth exceeded expectations.

Two experts in the latest poll still said the central bank would raise the rate to 5.25%.

“A rate hike of 50 or 75 basis points on June 11 would give an impression that the central bank is panicking,” said Natalia Orlova, chief economist at Alfa Bank.

“Such a sharp rate increase at the second straight meeting would result in an accelerated rise in demand for loans and would itself form elevated inflationary expectations.” 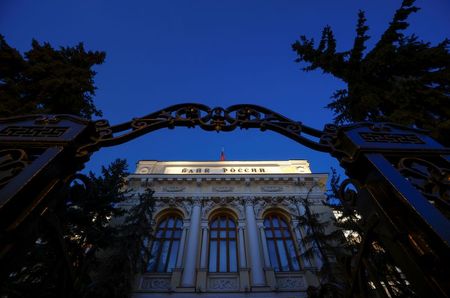