(Reuters) -The Russian rouble strengthened on Monday, firming past 77 against the euro to a near two-year high, helped by tax payments that companies are due to make this week and as the market looked ahead to a central bank rate decision on Friday.

The rouble was 3% stronger against the dollar at 73.17, hovering around levels seen before Feb. 24, when Russia sent tens of thousands of troops to Ukraine.

Trading activity remains subdued compared with levels seen before Feb. 24. Movements in the rouble are artificially limited by capital controls imposed by the central bank because it lost the ability to support the rouble through FX interventions after Western sanctions froze nearly half of the country’s reserves.

The currency was supported by a record 3 trillion roubles ($40.25 billion) that companies are due to pay in taxes this month, according to analysts surveyed by Reuters. To make the payments, some export-focused firms need to sell foreign currency.

The tax boost may push the rouble higher, said Veles Capital in a note, but an expected rate cut by the central bank on Friday may dampen optimism.

Market players are looking ahead to the central bank rate decision, after two emergency rate moves in the last month – a hike to 20% in late February, followed by a cut to 17% on April 8.

A Reuters poll suggested the bank will cut by 200 basis points to 15%.

In another sign that the state wants to stimulate economic growth, President Vladimir Putin on Monday proposed reducing the subsidised mortgage rate to 9% from 12%.

At a televised meeting on the economy, Putin praised the central bank’s and government’s “timely” decisions in helping stabilise the economic situation.

The central bank on Monday said it was shortening the time frame it uses to calculate the official exchange rate by one hour, a move that Sberbank CIB analysts said suggested the regulator was noting an improvement in the liquidity situation on the foreign exchange market.

Russia is still grappling with capital flight. The share of foreign investors among holders of Russia’s OFZ treasury bonds declined to 17.7% in March, its lowest since late 2012, central bank data showed on Monday.

(Reporting by Reuters; Editing by Kenneth Maxwell and Toby Chopra) 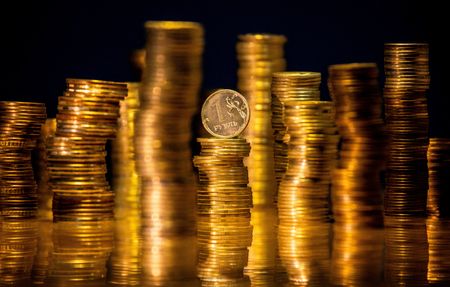