(Reuters) – Russia’s lower house of parliament has approved a draft bill that would ban Russian banks from sharing “banking secrets” with foreigners, the State Duma said in a statement on Wednesday, in the latest move to protect the country’s financial sector.

Authorities have already allowed Russian companies and banks to not disclose information on securities issued and lists of contractors, so as to shield themselves from possible sanctions.

And Russia’s central bank has said it will not publish banks’ financial statements on its website until October.

The Duma’s statement said Russian credit institutions will now be forbidden from providing relevant authorities of foreign states with information about customers and their transactions as well as about beneficiaries and beneficial owners.

“The law will minimise the risks associated with the adoption by unfriendly states of changes to national legislative acts aimed at obtaining from foreign banks, under the threat of penalties, confidential information constituting a banking secret,” the Duma said, adding that there could be exceptions.

The statement said lawmakers had approved the bill in a third and final reading. To enter into force, it still needs to be approved by the upper house of parliament and signed by President Vladimir Putin, steps which are seen as a formality.

The central bank has said it would no longer publish the names of banks connected to Moscow’s alternative to the SWIFT payments network and has temporarily stopped publishing data on foreign trade on a monthly basis, as Russia responds to crippling sanctions over the Ukraine crisis. 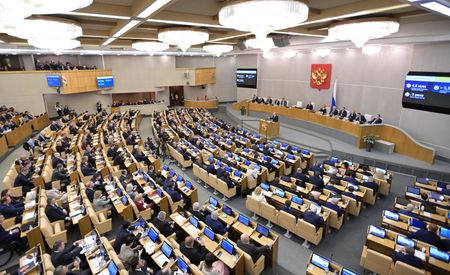