Moscow is blocking foreign investors, who hold tens of billions of dollars worth of Russian stocks and bonds, from exiting after its invasion of Ukraine triggered a wave of economic sanctions and a haemorrhage of assets.

The Bank of Russia said on Wednesday it had banned coupon payments for foreign investors holding rouble-denominated sovereign debt, known as OFZs, and Russian companies were also barred from paying dividends to overseas shareholders. It did not specify how long the curbs, which don’t apply to local investors, would last.

“They have no problem with paying OFZs because they can print roubles, but they seem to have decided that foreigners won’t get the money,” said Paul McNamara, investment director at asset manager GAM Investments.

“We can argue the toss about whether that is a default or not, but it doesn’t really matter because this stuff is under Russian law so they can pay them if they want to or not pay them if they can’t.”

On Wednesday, Russia’s finance ministry channelled 11.233 billion roubles ($107.5 million) from the state budget to coupon payouts on two OFZ treasury bond series. It was due to pay a 6.5% coupon the OFZs due to mature in February 2024.

The ministry did not mention whether payment was made to foreign investors, which include major asset managers such as Vanguard, BlackRock, Ashmore and Fidelity who held the February 2024 bond, according to data from the Refinitiv eMaxx database.

Its next payment on hard currency debt, coupons on two Eurobonds, is due on March 16.

“Issuers are eligible to take decisions on paying dividends and making payments on other securities,” the central bank said in a statement on Wednesday. “But actual payments … towards foreign clients will not be made. This applies to OFZs as well.”

The National Settlement Depositary (NSD), the Russian system for overseeing the sale of securities, said it was limiting payment options on Russian securities for foreign individuals and companies, as well as a right to transfer such assets, in line with a central bank request.

The world’s biggest settlement systems, Euroclear and Clearstream, are no longer accepting Russian assets, effectively shutting off an exit route for overseas investors.

Belgium-based Euroclear said in a note on Tuesday that the NSD had blocked its accounts as a result of the central bank measures.

“To the extent legally permissible, you should wire out any remaining long balances in roubles as soon as possible,” it said.

Clearstream also informed its customers on Tuesday evening that the NSD has blocked all securities held on Clearstream Banking’s FNH Account until further notice.

Foreigners held around 3 trillion roubles ($28 billion) worth of OFZs out of a total market of 15.5 trillion roubles, according to central bank data, and nearly $20 billion, or 51%, in sovereign Eurobonds.

Foreigners held 19.7 trillion roubles in Russian shares as of July, 1, or around a third of the total market capitalisation at that time. Moscow has kept the stock market shut this week to help stem losses.

The central bank also said on Wednesday that Russian residents can no longer make foreign exchange transfers to foreigners under loan agreements.

Russian banks and companies had $391 billion in outstanding external debt as of Oct. 1, according to Dmitry Polevoy, head of investment at Locko-Invest.

“This could be understood as a ban on servicing external loans which equals a default,” Polevoy said.

In a matter of weeks, Russia has gone from a lucrative, oil-rich investment destination to a financial pariah. The rouble has plunged to record lows, and in London, depository receipts for Russia’s biggest bank Sberbank and gas giant Gazprom, once Moscow’s top blue chips, have lost over 90% of their value. 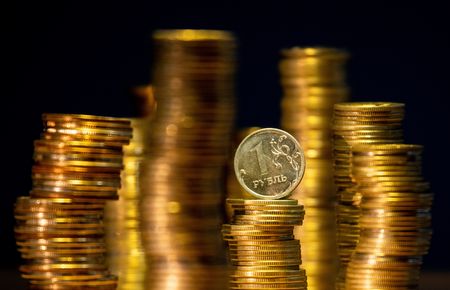 Disney says returning CEO Iger to get $1 million base salary

Salesforce shares jump on report that Starboard has taken a stake

Factbox-What is the ‘metaverse’ and how does it work?