Home Asia Rouble firms towards 61 vs dollar despite EU sanctions

(Reuters) -The Russian rouble reversed earlier losses and firmed towards 61 against the dollar in volatile trade on Tuesday as capital controls helped to offset downside pressure from concerns about new European sanctions against Moscow.

European Union leaders agreed in principle on Monday to cut 90% of oil imports from Russia by year-end and on other sanctions, such as cutting Sberbank from the SWIFT transaction network, to punish Moscow for its intervention in Ukraine.

“It looks like the local currency should be able to gain a foothold around 60 by the end of the day,” Sberbank CIB said in a note.

Against the euro, the rouble gained 3.4% to 62.10, having last Wednesday hit a seven-year high of 57.10, at the peak of month-end tax payments that usually prompt export-focused companies to convert foreign currency to meet liabilities.

Boosted by capital controls, the rouble had risen to become the world’s best-performing currency so far this year until last week’s slide. New gas payment terms for EU consumers that require conversion of foreign currency into roubles and a fall in imports have also supported the rouble.

Shares in Sberbank, Russia’s No.1 lender, slightly underperformed the broader market and fell 1.9% on the day after the EU agreement on new sanctions. The bank said the move to cut it from the SWIFT messaging system would not affect its operations.

(Reporting by Reuters; editing by Barbara Lewis and Emelia Sithole-Matarise) 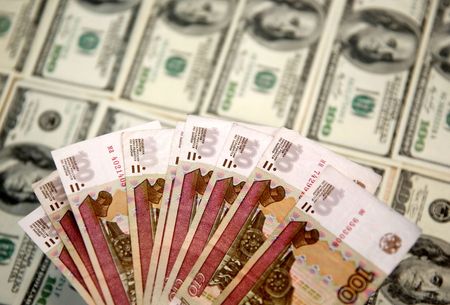 Marketmind: A week of central banks