(Reuters) -The chairman of Rogers Communications Inc tightened his grip on the Canadian company with the appointment of his confidante Tony Staffieri as the interim chief executive on Tuesday, replacing Joe Natale, with whom he had a falling out.

The development comes after the telecommunications company earlier https://reut.rs/3ChYKOY this month reinstated ousted Chairman Edward Rogers after a court backed his petition to constitute a new board.

The company said https://refini.tv/3wUZgBx Natale has left the company, effective Tuesday, and the search for a permanent chief executive officer is on.

Natale’s exit delivered another twist to the turbulent few weeks at Canada’s biggest wireless carrier, after a messy feud in the founding family spilled into the public and sparked a bitter battle for the control of the board.

A rare public fight to rock the Canadian corporate world was triggered over the question of who should lead the company and had weighed on the stock.

The dispute started in September after Edward Rogers, the only son of late founder Ted Rogers, tried to drop Natale from the position of the CEO, saying he had lost confidence in Natale’s ability to lead the company through the Shaw merger.

Edward Rogers wanted to replace Natale with Staffieri, the company’s then chief financial officer, but he failed to win board support and that resulted in Staffieri leaving the company. But Edward Rogers’ attempt to replace the CEO put him at odds with his mother and two sisters, who are company directors.

Edward Rogers lost out in the power struggle and was removed as the chairman of Rogers. But he petitioned https://reut.rs/3FsevVz the British Columbia Supreme Court to validate the new slate of directors he had appointed, and the court ruled in his favour.

“Tony is amongst the most highly regarded and seasoned telecommunications executives in the industry and was a key part of the Shaw deal,” Edward Rogers said in a statement.

Staffieri has more than 30 years of experience in the telecoms, media, sports and financial sectors, including nine years as the chief financial officer of Rogers. Prior to joining Rogers, Staffieri held senior positions at BCE Inc.

Rogers Communications director Robert Gemmell said in a statement that following the court ruling, the board had worked to establish a “constructive working relationship” to see Natale remain CEO through the closing of the Shaw merger. But a mutually agreeable arrangement could not be reached, resulting in Natale’s departure, the statement added.

The boardroom battle has weighed on the company’s shares, which gained just 2% so far this year, compared with a 17.6% jump in BCE and 14.5% rise in Telus Corp, both rivals of Rogers.

The unique ownership structure in Rogers gives the chairman enormous power. Under the structure, 10 people close to the late founder, including his four children and widow, and several longtime family friends, sit on an advisory committee of the Rogers Control Trust. The trust owns 97.5% of Class A voting shares in Rogers.

The company said the merger process with Shaw continues to move forward, and the teams of Rogers and Shaw will meet Canada’s telecoms regulator and attend a public hearing on Nov. 22.

The news was earlier reported by The Globe and Mail.

(Reporting by Bhargav Acharya in Bengaluru and Denny Thomas in Toronto; Writing by Denny Thomas; Editing by Uttaresh.V and Sherry Jacob-Phillips) 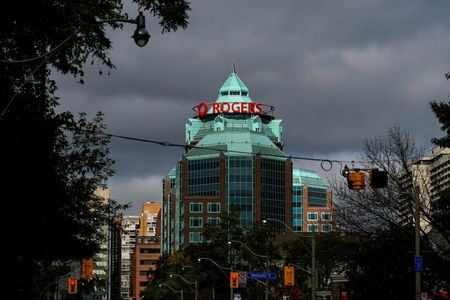 IMF board to back Managing Director Georgieva – sources