MELBOURNE (Reuters) – An executive with mining company Rio Tinto has played down damage to Indigenous Australian heritage, an Aboriginal group said on Thursday, in a submission to an inquiry into widespread destruction of sites of cultural significance.

A spokesman for Rio Tinto said the company declined to comment.

News emerged this year that Rio forerunner Hamersley Iron failed to protect artefacts belonging to the Wintawari Guruma Aboriginal Corporation (WGAC) that had been salvaged from its Marandoo iron ore project including 18,000-year-old evidence showing how people lived during the last Ice Age.

Those and other artefacts were thrown in a Darwin rubbish heap.

The group’s complaint centres on a statement by Rio’s head of Indigenous Affairs, Brad Welsh, who last month told the Juukan Gorge Inquiry: “We have not identified any evidence that Rio Tinto directed any disposal of artefacts,” according to the submission.

The group said such comments showed Rio’s “continued lack of regard and respect for Eastern Guruma cultural heritage”.

“The comments clearly sought to downplay importance of the cultural material disposed and lessen Rio’s involvement and responsibility for what occurred,” the group said in its submission.

Rio Tinto operates six of its 16 mines and three rail lines on the group’s traditional lands.

Welsh told the inquiry that the world’s biggest iron ore miner had not been able to put together a “complete picture” of the potential cultural or archaeological value of what was discarded, given the passage of time, and without knowing if its records were complete.

“However, we do recognise that decisions made on the management of these materials may not have adequately considered archaeological and cultural values in the analysis completed,” he said, adding that current standards of analysis would be more comprehensive. 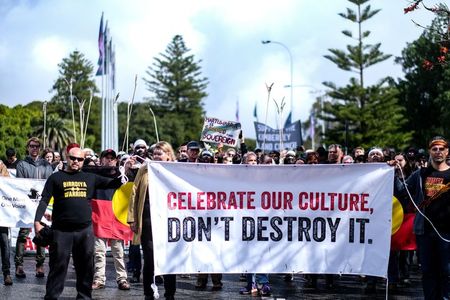 With green energy, Japanese governor wants to take Fukushima out of...