Raskin, a former Fed governor and Treasury official under former President Barack Obama, will replace Randal Quarles who was appointed the Fed’s vice chair for supervision by Republican former President Donald Trump in 2017, the White House said on Friday. Quarles stepped down from the role in October and left the central bank at the end of December.

The bank supervision role is the most consequential of several vacancies on the Fed’s seven-member Board of Governors available to be filled by Biden, giving the first-term Democrat an opportunity to steer the direction of both Wall Street oversight and monetary policy for years to come.

Biden also picked economists Lisa Cook and Philip Jefferson to help fill out the Fed board.

Raskin is expected to take a much tougher stance on Wall Street than Quarles, who riled progressives with an industry-friendly approach that included easing several rules introduced following the 2007-2009 global financial crisis.

Biden has already decided to renominate Fed Chair Jerome Powell to a second term and Governor Lael Brainard to the Fed’s other vice chair slot, which is focused on the Fed’s economic and monetary policy agenda.

As with those two appointments, Raskin would have to be confirmed by the thinly divided Senate where she might face a highly partisan reception. Raskin has been confirmed twice before, but those votes predated the current partisan rancor that pervades Capitol Hill.

Those who have worked with her say she is able to build consensus.

“Sarah is an incredibly collaborative individual,” said Kathleen Murphy, CEO of the Massachusetts Bankers Association. “She listens to everybody.”

As the former CEO of the Maryland Bankers Association, Murphy worked closely with Raskin to navigate the global financial crisis when she was commissioner of financial regulation for Maryland from 2007-2010. Together, they dealt with the first bank failure in Maryland in 40 years.

“Everyone felt like they had a voice at the table. They may not have agreed with her … but they felt that their views were heard.”

A Harvard-trained lawyer with an undergraduate degree in economics from Amherst College, Raskin served on the Fed Board from 2010 to 2014 before moving to Treasury as deputy secretary.

While her role then did not specifically involve bank oversight, Raskin took a tough stance on key elements of the Fed’s post-crisis reform agenda.

For instance, she slammed proprietary trading as of “low or no real economic value.” She also pushed for a strict interpretation of the “Volcker Rule,” a major reform curbing speculative investments which Quarles has eased over the past four years.

Quarles said he tailored that and other rules to banks’ risks and that the industry’s stellar performance amid the pandemic’s economic crisis shows he did not weaken the system.

Powell, who like Quarles is a former partner at private equity giant Carlyle Group, backed Quarles’ changes, but has said he will allow the new supervision chief to take the lead on regulation issues.

“Raskin is a tough and thoughtful financial regulator with decades of experience at both the state and federal levels,” Democratic Senator Elizabeth Warren said in a statement on Friday.

“In the important role of vice chair for supervision, she brings a commitment to protect the American people that has been sorely missing from the Fed board for years.”

If confirmed, Raskin faces a dilemma: how much time and political capital to expend revisiting Quarles’ Wall Street giveaways versus focusing on novel issues like climate change, cryptocurrencies and fintech.

A major effort to overhaul Quarles’ work would suck up the resources and political oxygen needed to address other Democratic priorities, and might be opposed by fellow regulators and even some centrist Democratic lawmakers, Reuters reported.

As a Fed board governor, Raskin would also have a vote on monetary policy. If confirmed, she will arrive at the Fed at a critical juncture for the central bank’s stewardship of the U.S. economy and its recovery from the COVID-19 pandemic that triggered a short but historically deep recession in 2020.

The Fed in late 2021 shifted its policy stance in the face of an inflation rate that is running at nearly three times the central bank’s 2% flexible annual target. The surge in prices for consumer goods and services, initially dismissed as a coronavirus pandemic-oriented overhang that would be “transitory,” has grown into a substantial political issue and headache for both Biden and the Fed. 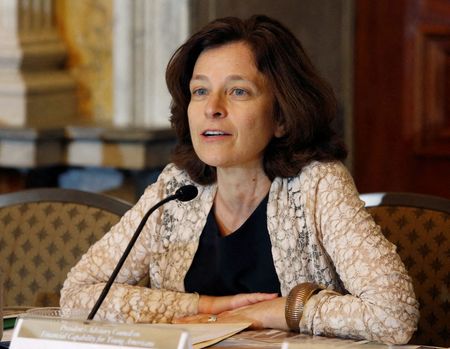