(Reuters) – A member of the Sackler family that owns Purdue Pharma testified on Tuesday that his family bears a “moral responsibility” to help abate the U.S. opioid crisis but said it will not contribute financially to the effort unless it receives broad legal protections.

The OxyContin maker last week kicked off its long-awaited bankruptcy trial https://www.reuters.com/legal/transactional/purdue-pharma-bankruptcy-trial-begins-with-opponents-eyeing-sackler-shields-2021-08-11 over its plan https://fingfx.thomsonreuters.com/gfx/legaldocs/dgkplrrnypb/126021698131-rep-1407114041.pdf to resolve thousands of claims accusing it and the Sackler family of fueling the U.S. opioid crisis.

Purdue and its Sackler family owners have denied wrongdoing in connection with the lawsuits.

More than 500,000 Americans have died since 1999 from opioid overdoses, according to the Centers for Disease Control and Prevention.

David Sackler, a former Purdue director, made his statement during the virtual trial in a White Plains, New York, bankruptcy court over a $10 billion settlement that aims to resolve the lawsuits over deceptive marketing.

Sackler said Purdue’s products have helped millions of people. But he acknowledged that they had contributed to the opioid crisis and said his family bears “a moral responsibility to help, and that’s what this settlement is designed to do.”

The deal is supported by a wide range of states, municipalities, hospitals and others, but faces opposition from nine states and the U.S. Department of Justice’s bankruptcy watchdog, the U.S. Trustee.

The settlement includes releases protecting the Sackler family members that own Purdue against future opioid-related litigation in exchange for a $4.5 billion contribution to a trust that would distribute funds to opioid abatement programs. Opponents of the deal say the releases are too broad.

In response to questioning from U.S. Trustee attorney Benjamin Higgins on Tuesday, Sackler said his family would not be willing to contribute money “in this fashion” toward opioid abatement if the bankruptcy court rejects the releases.

Sackler also said his family had not considered an amount of money it would pay in exchange for narrower releases.

The trial is expected to last several more days. Sackler is the only member of the family so far to testify. 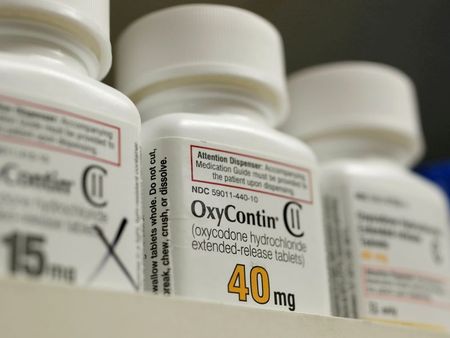 Apple’s Cook says he will talk with U.S. official on immigration