By Cynthia Kim and Heekyong Yang

SEOUL (Reuters) – South Korean steelmaker POSCO said on Sunday will halt some of its plants in the country due to a lack of space to store finished products, which have not been shipped due to a strike by truckers who are demanding higher pay as fuel prices surge.

“Some production at our Pohang steel plants is set for suspension, and we are not yet certain how long this suspension will last,” a POSCO spokesperson said, adding that the halt will take effect from Monday.

The decision came as the government and the Cargo Truckers Solidarity union were holding a fourth round of meetings to find a compromise and end the strike, which began on June 7.

As ports worldwide struggle with supply bottlenecks, a slowdown in chip production, petrochemicals and autos threatens South Korea’s mainstay exports, and consumer inflation in Asia’s fourth-biggest economy is at a 14-year high.

The truckers are demanding an extension to subsidies, set to expire this year, that guarantee minimum wages as fuel prices rise.

The Ministry of Land, Infrastructure and Transport said it responded to the union by explaining “that ship owners, the party of interest, demand the current Safe Trucking Freight Rates System be abolished”.

A joint statement from a total of 31 industry associations on Sunday urged truckers to end their strike and return to work, as bottlenecks are building up across industries including cement, petrochemical, steel, auto and IT components.

“This lengthening strike by the Cargo Solidarity is nothing more than putting up a fight in an extreme way by holding national logistics as a hostage, even as the government has said it will find a way for inclusive growth through talks,” associations representing employers, taxis, semiconductors, automobiles and others said in the statement.

Around 40 people have been arrested in the strike, some later released. The actions have been largely peaceful, though tense at some locations.

The ministry estimated some 6,600 truckers, or 30% of the Cargo Truckers Solidarity union members, were on strike on Saturday, halting trucking activities at petrochemical complexes in Ulsan and slowing product deliveries for POSCO.

The union says the number of those striking was higher, without specifying a number, and that non-union truckers were also choosing not to work.

Container traffic at Busan port, which accounts for 80% of the nation’s total, had plunged by two-thirds from normal levels on Friday, a government official said.

At Incheon port it has fallen 80%, while at the port for Ulsan, the industrial hub where much of the strike action has occurred, container traffic has been halted since Tuesday. 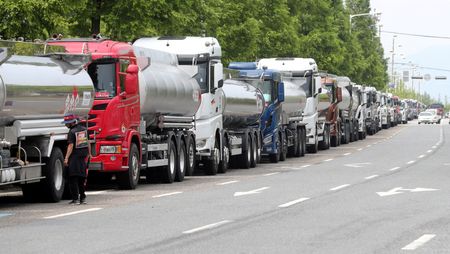 Lufthansa to suspend flights to Kyiv, Odessa from Monday

U.S. should consider ‘safe harbor’ from Russia sanctions for some companies – trade group

Euro zone inflation surges to 10-year-high, in headache for ECB