AMSTERDAM (Reuters) – Europe’s biggest port Rotterdam said that goods throughput fell by 1.5% in the first quarter as trade was hit by the impact of sanctions on Russia, and it expects the conflict in Ukraine to hit volumes for the full year.

In 2021, 30% of oil imports via Rotterdam were from Russia, while 25% of its liquefied natural gas imports came from Russia and 20% of coal that arrived in the Dutch port.

The Port of Rotterdam said it was too early to judge how much volumes from Russia had fallen but “by now in virtually all sectors the impact is visible from the sanctions and the decisions by individual companies not to do business with Russia.”

The port said that falling container volumes to Russia had become apparent in March as most shipping companies stopped taking Russian container bookings, and most deep-sea terminals had halted exports as well.

Russian oil, coal and gas are not yet subject to European sanctions, but some companies, including Shell, have stopped or slowed doing business with Russian companies voluntarily and ahead of likely further sanctions.

The port said that 113.6 million tonnes of goods in total were transhipped via Rotterdam in the first quarter of 2022, down from 115.2 million in the same period of 2021.

“We expect that the developments in Ukraine and the greatly worsened relationship between Russia and many other countries will impact throughput volumes in the rest of the year as well,” Port of Rotterdam CEO Allard Castelein said in a statement.

The loss of trade with Russia was partly offset by rising trade elsewhere.

“Since March, oil companies are taking less oil from Russia,” the port said, noting that the overall volume of raw oil imported had remained almost flat at 25.5 million tonnes.

LNG imports jumped 78% in the first quarter from a year earlier to 2.7 million tonnes.

The port noted that high prices had hit German steel production, contributing to a 20% fall in iron ore imports.

Disruptions to trade from China due to lockdowns there also posed a risk.

“In the first quarter the consequences of the COVID lockdowns in Shanghai were not yet visible in Rotterdam,” the port said. 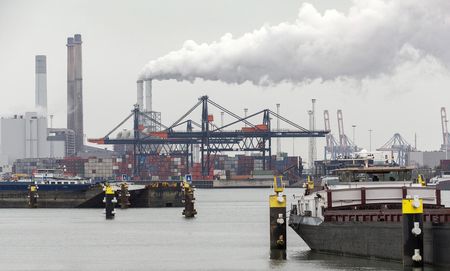